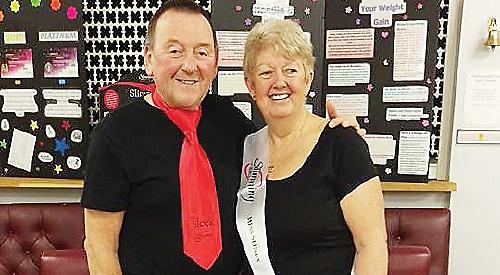 DESPITE shedding a combined total of eight stone this year, Paula and Dave Mager didn’t skimp on their Christmas dinner.

The couple, who live and work at the Swiss Farm campsite off Marlow Road, Henley, allowed themselves to gain three pounds each over the festive season as they are confident they can quickly lose it again.

Earlier this month, they were named Mr Sleek and Miss Slinky 2016 by their Slimming World group, which they joined in May after Mrs Mager decided they should do something about their increasing weight.

Mrs Mager said: “We spend every winter in Spain and when we came back in February I realised all we’d done was eat and drink.

“I didn’t like the way we looked in photographs and was worried we wouldn’t be here in a year’s time.

“Dave groaned when I suggested Slimming World but I said we had to try something. I’d joined a gym the year before but that didn’t work as I injured my knee on the rowing machine, which made me even less active and started a vicious circle of gaining weight.”

The slimmers’ group meets at Henley Hockey Club every Tuesday and is led by consultant Kerry James.

The Magers, who have five children, were given a cookbook with healthy recipes to follow and were allowed a certain number of “syns”, or less healthy items, every day.

These include various stews and even a full English breakfast prepared without oil. A week after joining, Mrs Mager had lost 6lb and she went on to lose a total of 3st 8lb and dropped from a size 22 to a size 14.

Her husband lost 5lb in the first week and then a total of lost 4st 8lb and 10 inches from his waist.

At the same time, his blood glucose levels are approaching those of a non-diabetic.

Mrs Mager said: “At first I thought we had to be eating too much but the weight just fell off. We were losing every single week and it’s still falling off now.

“It was such a lovely, supportive group and that played a big part. You knew you wouldn’t be criticised if you didn’t lose weight one week — it would just be a case of looking to the next week.

“We never felt deprived at all so it wasn’t like being on a ‘diet’ in the way most people think of it. We didn’t even need to exercise, which we don’t have time for when we’re working.

“It’s great that I don’t have to buy clothes from the big girls’ section in shops any more, though it has been quite expensive as we’ve both had to change our wardrobes!

“It was lovely to win the award and to have our achievement recognised. The group feels we’ve inspired them, although all we did was follow the book.”

The couple were back in Spain for Christmas and off the wagon as they visited a restaurant with friends for a Spanish version of Christmas dinner.

Mrs Mager said: “We’re not worried because we know we can get straight back into losing weight afterwards. It’s a long-term lifestyle change and it has given us our lives back.”