Visitor bowled over by beauty of riverside 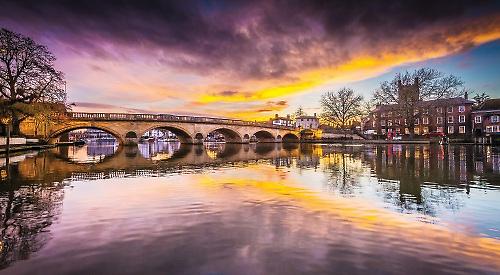 THIS stunning image of Henley at sunset was captured by commercial photographer Barney Warner, who was in town on business.

Barney, who is based in West Sussex, had never been to Henley before and was struck by the beauty of the town as he drove across the bridge.

During a break in his assignment, he spent half an hour or so taking some pictures for his personal collection.

The images were taken at about 5pm. This one shows the 18th-century bridge from the jetty at Leander Club for which Barney mounted his Canon 5D Mark III camera on a tripod at knee height in order to capture the biggest possible expanse of water.

Barney, 35, says: “I got here early and saw several things that I wanted to capture so it was a case of hanging around until the right moment and then I kept snapping away.

“I thought to myself ‘I expect a million photographers have done this before’ but all of a sudden, as the sun lowered, the sky and clouds became a blanket of colour which heightened my excitement.

“I’d never thought just how beautiful Henley would be. I know everyone talks about it but I didn’t think it would be quite so lovely.

“It was important for me to get the river in the picture because that’s a central part of Henley’s image. I’d love to come back and take more photos.”