TV presenter proves to be a right Charlie 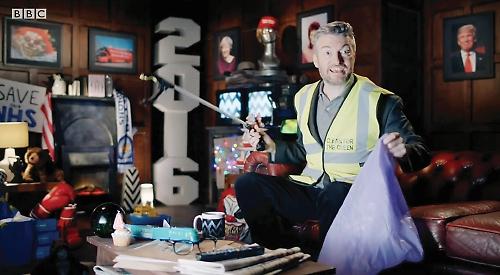 VOLUNTEERS who tidied up Goring to mark the Queen’s 90th birthday appeared in a televised round-up of last year’s news highlights.

But those who recognised themselves on Charlie Brooker’s 2016 Wipe, which aired on BBC 2 on Monday evening, may not have been impressed with how they were depicted.

The annual broadcast, which takes a satirical look back at the events of the previous 12 months, included a segment on Country Life’s Clean for the Queen initiative, which was backed by Keep Britain Tidy and MPs Boris Johnson and Michael Gove, among others.

While showing footage of Goring’s efforts, Brooker said: “Some people thought it was a bit patronising to ask citizens to put on a little bib and go around picking c**p up off the floor in demeaning scenes like this.”

Brandishing a litter-picker, he added mockingly: “Come on proles, let’s get cleaning!”

Something tells me he won’t be receiving an invitation to appear at Goring and Streatley Festival.