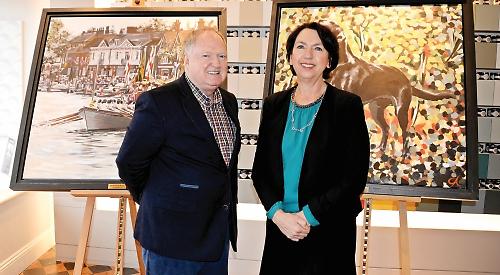 ARTIST Clive Hemsley has created his latest artworks with paint and brushes normally used by decorators.

The two paintings depict the royal barge Gloriana and a dog belonging to one of his friends.

They were created using 45 shades of Farrow & Ball emulsion, which is typically used for painting walls and ceilings, and are now on display at the company’s showroom in Riverside, Henley.

Mr Hemsley, an advertising executive who lives in Hart Street, Henley, spends a lot of his spare time painting but usually uses acrylic paint, which is thicker and can be mixed with different pigments to create different shades.

He also normally uses a fine brush with a point but this time he used brushes with a half-inch wide tip, meaning he had to use much bigger strokes for the large canvases.

He began working on the paintings in January after redecorating his studio, which is an annexe at the back of his home at Longlands House.

The Gloriana canvas is based on a photograph that Mr Hemsley took on his mobile phone at the Henley Royal Regatta about three years ago and depicts a section of Riverside in the background. This took several weeks to complete.

The other image is of Jenson, a black Labrador owned by David and Emma Mole, from Shiplake, which was easier to paint as Mr Hemsley has painted hundreds of pictures of dogs, many of them free of charge for Henley Standard readers.

He has not yet decided what to do with his latest works but is most likely to auction them for charity.

Mr Hemsley said: “I was picking up more paint at Farrow & Ball when Simone Jones, the manager, said I should try making some artwork with it. I agreed because I wanted to challenge myself.

“I chose the Gloriana image because it’s quintessentially Henley. The boat is often here over the summer and it’s as much an icon of the town as anything else. I also thought the composition of the photograph was lovely.

“The paint proved to be pretty versatile, although some colours worked better than others, and it was strange having to stick with certain colours straight out of the pot instead of mixing your own. isn’t the best medium because it’s water-based so the consistency is thinner and you have to be careful that it doesn’t drip and run down the canvas.

“I had to take a bit of an impressionistic approach because it simply wasn’t possible to work at a really fine level but I think it has worked out really well. I wouldn’t do it again, though. It was satisfying to finish it but it took too long — anything more than a couple of days and I lose interest!”

Gloriana was launched in 2012 to celebrate the Queen’s diamond jubilee and appeared at that year’s Henley Royal Regatta and again in 2013 and 2014.

The barge also attended the Thames Traditional Boat Festival at Fawley Meadows in 2015 and 2016 and will be returning to this year’s event, which runs from July 14 to 16.

Meanwhile, Mr Hemsley has joined the festival’s s advisory board.