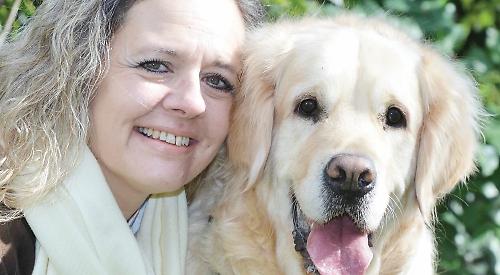 HENLEY is missing a familiar face after Humphrey, a golden retriever belonging to town councillor Sam Evans, passed away.

Sam was rarely seen without her seven-year-old dog who accompanied her around town and was a regular at Henley Rugby Club.

Humphrey died last week after a short battle with cancer.

Sam, who lives in Reading Road, said: “I grew up with dogs but he was the first of mine. I used to travel so much for work that I didn’t get him until I worked from home.

“We went everywhere together — he was an honorary member of the rugby club and went for the first time when he was nine weeks old!

“He was affectionately known as Humphrey Bear as he loved the world and everyone in it. He was huge fun and loved nothing more than playing.

“He spent so much time in the Thames chasing sticks and swimming, it was like his own private swimming pool.

“There is a fabulous community of dog walkers in Mill Meadows and he had a group of friends who all played together every morning.”

Sam has received hundreds of messages of support from friends. She said: “My house is like a florist’s shop; people have been wonderful and I’m really grateful. I had more than 180 messages on Facebook, which is incredible.

“I love the fact that so many people knew Humphrey.

“He was my little world but he was a dog and for people to be so lovely about him says a lot.

“He was also there for me through a couple of tough times.”

Sam, who runs Humphreys of Henley, said her pet showed no symptoms until days before his death.

She said: “The horrible bit was the utter shock as I expected him to be around for another few years.”