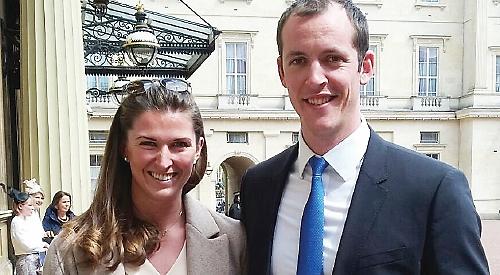 ROWER Scott Durant has another memento to go with the gold medal he won at the Rio Olympics last summer.

He was one of four members of the Team GB eight who went to Buckingham Palace to receive honours.

Scott, 29, who is a member of Oxford Brookes University Boat Club and lives in Gravel Hill, Henley, was made an MBE.

The others were cox Phelan Hill and Matt Gotrel, who became MBEs, and triple Olympic champion Pete Reed, who received an OBE. All three are members of Leander Club.

The athletes were among about 80 people to be presented with honours by the Princess Royal.

Scott, who travelled to London with his partner Phoebe Lucas, mother Diane and older brother Kyle, said: “The Princess spoke with us for just under a minute, which is quite a long time considering how many people she had to meet.

“It is all a bit of a blur but I mostly talked to her about my new career.

“I was trying to just take it in my stride and enjoy the day. The excitement of the Olympics has gradually died down and it was nice to have another memento of it.

“I enjoyed soaking up the atmosphere and my family did as well because it’s not every day you get invited to Buckingham Palace!”

Other members of the eight include Will Satch, Matt Langridge, Paul Bennett and Tom Ransley, who have been made MBEs, while Andrew Triggs Hodge, a Molesey Boat Club rower who lives in Checkendon, received an OBE.