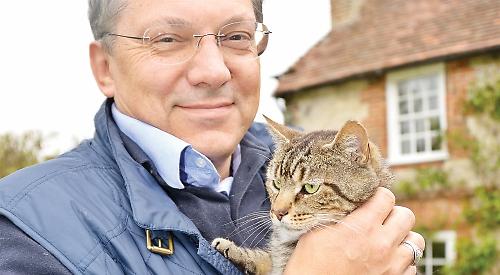 VASYA the cat is quite the talking point in Ewelme — and no wonder.

He belongs to villagers Alexandre and Harriet Akoulitchev who adopted the 10-year-old grey tabby tom from the Russian embassy in South Kensington.

Alexandre, a Ukrainian scientist, was visiting the embassy to renew his Russian passport in 2012 when he saw an advert appealing for a new home for Vasya.

He took a photograph on his mobile phone and texted it to his wife, who liked the look of the cat and said they should have him. Alexandre told the embassy of his interest and was asked to return the following week.

It is believed Vasya had belonged to a diplomat who was unexpectedly summoned back to Russia.

When Alexandre went back, he was given security clearance to drive through the embassy gates and then wait outside the building in his car. Vasya, which is short for Vasily, the Russian equivalent of Basil, was brought out in a crate by a group of senior personnel, including military officers.

He was then given an informal send-off along with a special certificate wishing him well for his new life.

Harriet, who runs Ewelme Pottery and works as a potter under her maiden name of Coleridge, said: “All the staff came out to say their goodbyes, even this one colonel who usually spent all his time behind a desk. They clearly cared a lot about him.”

The cat now shares the couple’s home with their two other cats, Grisha and Little Bear.

Harriet said: “When Vasya first arrived he wasn’t neutered so he was pretty big. He had a solid build with these big cheekbones so I found him quite intimidating but now I absolutely adore him.

“I think that’s the way things are in Russia. Neutering is routine over here but it’s not common practice over there and I can’t imagine it’s the sort of thing Mr Putin approves of.

“We were very keen to arrange that before he fathered lots of little Vasyas. In fact, we had an unspayed female at the time so we left him with a friend but he escaped through an open window. He ended up roaming the countryside around Ewelme for well over a month.

“My husband saw him in the dark as he was driving home one night but wasn’t able to catch him. Luckily, Vasya eventually wandered into a neighbour’s house to look for food and they kept him there for us to pick up.

“He’s very well-behaved now, though, and barely leaves the house. He’s more like a dog as he follows us everywhere — on one occasion he even followed us across the village to a party and stayed the whole night.

“He’s even got a bit of a sixth sense for when we’re planning to leave the house and gets quite grumpy about it.”