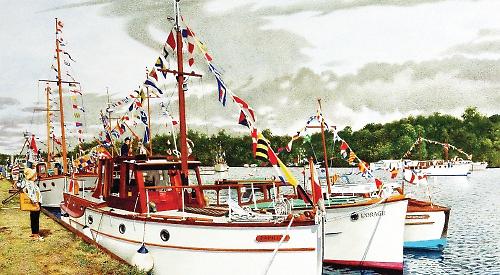 It was painted in watercolours by artist Bill Mundy, who lives just outside the town in Wargrave Road and has been attending the festival for decades.

Visible in the foreground are Papillon, L’Orage and Chumley, all of which took part in the evacuation in 1940 and regularly appear at the annual event.

A further six are seen moored behind them or cruising along the river in the background.

Mr Mundy, 80, created it partly from his imagination last autumn. It is based on a series of photographs of the boats which were taken from different angles.

He has offered it to the festival organisers to display at this year’s event, which takes place on Fawley Meadows, off Marlow Road, from today until Sunday. He hopes a private buyer will take an interest.

Mr Mundy, who has previously painted the royal row barge Gloriana during one of its festival appearances, said: “It’s interesting to ask people how many boats they see because at first they only notice three. The masts of some of the others can be seen sticking up behind them and the rest are coming up the other side of the river.

“I’ve done about five paintings based on the river over the past few years but I think this is the most interesting and I’m hoping to get it exhibited by the Royal Society of Marine Painters next month. Few people have seen it because it hasn’t been exhibited yet.”

Mr Mundy included L’Orage as he was friends with its original owner Raymond Baxter, an ex-RAF fighter pilot who founded the Association of Dunkirk Little Ships and was the first presenter of the BBC’s Tomorrow’s World.

He lived next to Mr Mundy, who painted him a miniature portrait as a gift before his death in 2006.

Mr Mundy is also friends with John Calvert, of Goring, the new owner, who has restored it and extensively researched its history. His interest was further inspired by his friendship with William “Bill” Stone, of Watlington, a sailor who served in both world wars and made five trips back and forth during the Dunkirk operation, narrowly escaping being hit by a German torpedo in the process. He died aged 108 in 2009.

The festival was launched as the Thames Traditional Boat Rally in 1978 and ran every year until 2014, when it was called off due to flooding. It was revived under a new name the following year by Lady McAlpine, of the Fawley Hill estate.

Mr Mundy said: “I absolutely love it and think Lady McAlpine and her team have done a wonderful job. They haven’t just brought it back but improved it in many ways.

“For the first time this year I will be missing most of it due to a family engagement but I will definitely be aiming to attend on the Sunday.”