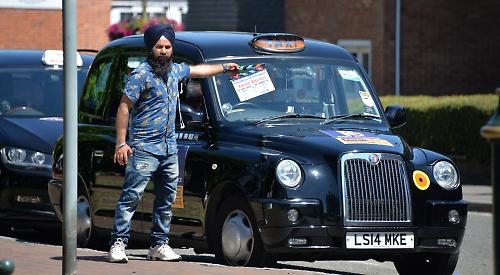 HENLEY is set to make a cameo appearance in a forthcoming Bollywood film.

Producer and director Rohit Jugraj, who is a well-known figure in Punjabi cinema, was in town recently shooting scenes for his fifth feature, Khido Khundi, which simply means “hockey” in English.

About 25 actors and crew set up camp on Station Park in Station Road in order to film a brief scene in which a taxi driver, played by Indian actor Manav Vij, climbs into his vehicle and drives off. Passing drivers slowed down to see what was going and some waved and beeped their horns at the film crew.

Most of the film, which is a romantic comedy set in the world of hockey, takes place in London but a few scenes have been filmed in Bath as well as Henley as the main characters’ parents live in a market town outside the capital.

The film examines the way in which hockey, which became popular in India during the Victorian era, has influenced the country’s relationship with Britain as well as Pakistan, which was created following the partition of India in 1947. The story follows the strained relationship between two brothers, one of whom is played by well-known Punjabi actor and musician Ranjit Bawa.

The crew also filmed the brothers fighting outside the River & Rowing Museum.

Location manager Bill Hayes says: “We chose Henley as we wanted a small, pretty town with a riverside location and it fitted the bill, particularly as it’s so close to London.”

The film is due to be released next month.