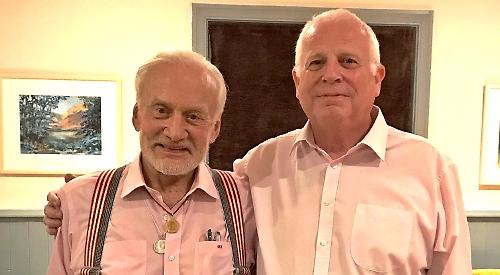 THE second man ever to walk on the moon enjoyed dinner at the Ferryboat in Whitchurch.

American engineer and former astronaut Buzz Aldrin, who was lunar module pilot for NASA’s successful Apollo 11 mission in 1969, spent more than three hours at the hostelry in High Street with three friends who live in the village.

The 87-year-old, who still writes and lectures on the subject of space flight, was visiting Britain as part of a trip around Europe to promote his vision for a mission to Mars. He believes the planet could be colonised within the next two decades.

Aldrin was visiting London for a meeting with education entrepreneur Sarina Russo but decided to visit Whitchurch the evening beforehand.

Graham Dednum, the Ferryboat’s landlord, said the party wished to remain anonymous but their guest enjoyed the evening.