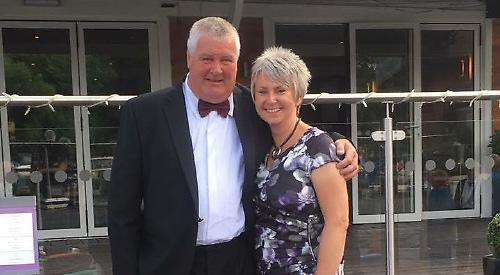 CERTAINTY is important when you are suggesting to someone you should spend the rest of your life together.

Derek Cheriton, from Christmas Common, couldn’t have been clearer with his intentions when he proposed to his now fiancée Louise Hatton.

He etched the words in 24m high, 4m wide text, into the side of a field in the Stonor Valley. “Lou, will you marry me?”, it read.

Derek proposed on September 8 after telling Louise they were taking their chocolate labrador Tia for a walk. He had written it out eight days before using specialist computer equipment from his spray contracting business DRC Contracting, which does a lot of work for farmers in the area.

One of his regular customers Simon Stracey, who runs White Pond Farm in Stonor, gave permission for him to use his field. It had been used to grow winter barley but was left to grow out.

Derek, 59, was due to spray the field down before it was cut back to be used again and he asked Simon if he minded him using it for his proposal. He says: “I had been thinking about asking for the last six months and friends have been egging us on about it all the time.  I’ve been looking for a field that would work and this was the best one — it couldn’t have come off any better.

“The writing started to show three days after it was sprayed and after about a week some of the walkers in the area were talking about it.”

Derek chose a certain route for the couple, who have been together for two years, to arrive at the field on the day.

They drove up a dirt track off Balhams Lane, near Turville Heath, and passed through some woodland before getting out of the car.

This meant Louise did not see the proposal until the field opened out in front of them when they walked out of the woods.

Derek says: “Lou could not see until it all opened out, it was perfect. When we came out it was looking as if it were written on a blackboard. She said yes and started crying and then I started crying.”

Louise, a headteacher at a primary school near Bicester, says: “I was absolutely stunned and it was an incredibly romantic gesture. Derek is not very romantic but that made it even more special.”

There were more surprises. Derek had arranged for about a dozen friends to join them for champagne before they all went to House of Spice, in Watlington, for a celebratory meal.

Derek said their friends were gobsmacked when they arrived and saw his creation.

“I had only told two of them what I was doing,” he says. “Most of them knew I was proposing but I just asked them to meet us in the field.”

Traditionally the man would drop down on to one knee to pop the question but Derek decided not to. He jokes: “I would have done but it was muddy – I thought I had already done enough!”

The picture of the field was sent to me by David Woodward who told me: “Swear we saw the grinning farmer who did it as we walked down Balham’s Lane — I bet she said yes!”

Congratulations to the happy couple.