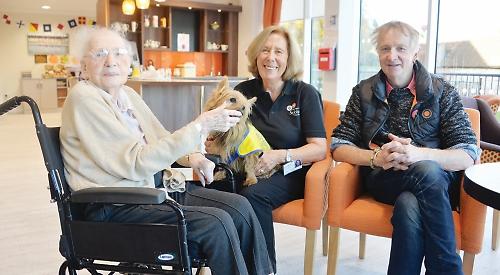 YOU may have read on page 4 about Tallulah the therapy dog and her visits to the Chilterns Court care centre in Henley.

Well, here is the 13-year-old Australian terrier with one of her favourite residents, 104-year-old Peggy Dixon.

As soon as they are in each other’s company, “Tally” enthusiastically licks Peggy’s hand to say hello.

Jean Garon, the dog’s owner, says: “Peggy is always really pleased to see Tally. Even though she is hard of hearing, she seems to know when Tally is coming into the room. You can see she really loves the dog.”