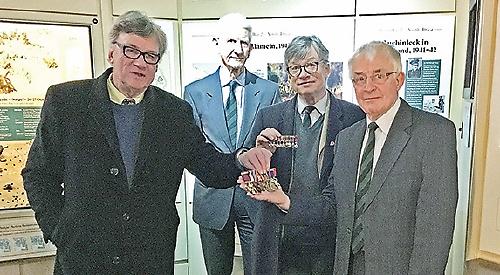 HIS name lives on. Major Tom Bird DSO, MC, hero of Alamein and the Desert War, died at his home in Turville Heath, where he had lived for 40 years, in August, aged 98.

Now he has had his name inscribed on Winchester Cathedral’s roll of fame of exceptional riflemen. “A big deal,” says his son Nicholas, who recently went to Winchester to present his father’s medals to Major Ken Gray, archivist at the Royal Green Jackets (Rifles) Museum.

“Bit of a wrench as they’re worth a bit,” he adds. In fact, the medals are not the originals but replacements.

Nicholas explains: “My father was wearing his medals when, as High Sheriff of Buckinghamshire, he was visiting Aylesbury Prison and they slipped off. Prisons are not a good place for this to happen and they would have been used as collateral for snout probably. They never turned up.

“The moral is don’t assume that prisoners all have hearts of gold — that’s not why they’re there.”