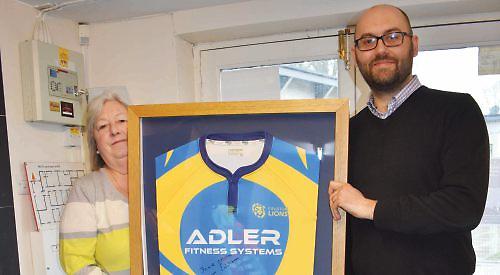 A NEW shirt is to go on display at Henley Rugby Club — and TV viewers will come to recognise it.

The blue and yellow jersey is that of the fictional side Causton Lions who made an appearance in ITV crime drama Midsomer Murders.

The jersey has been signed by all stars of show, including Neil Dudgeon, who plays DCI John Barnaby.

Henley Hawks first-team regulars Joe Butler, Brad Cook and Jamie Cox were asked to act as players during the filming.

Alistair Beynon, the Hawks’ commercial manager, said: “Because the club backs on to the Chiltern Hills it ticks all the boxes for filming.

“We’re extremely proud of the facilities at the club and it’s great they were able to do so much filming around the club.

“At one point they set the goalposts on fire and police cars rushed on the pitch. They had put warning notices in the doors but we still had a few people phone us to say the club was on fire!

“This helps put the club on the map and when there are Midsomer tours of the area we can be a stop for the visitors.”

The  shirt will be officially unveiled when the club hosts a premiere of the new Midsomer Murders episode later this year.