Our dog likes to pick litter 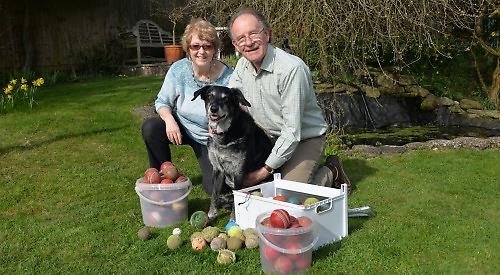 THIS is Chloe, the Labrador-collie cross who is tackling the litter problem in Peppard one mouthful at a time.

Each morning on her walk through the village to Peppard Common with owner Michael Macleod, she picks up rusty cans or plastic bottles to take home and put in the bin.

Chloe’s litter-picking started about three years ago when Michael stopped taking a ball with them to play fetch.

Instead the 10-year-old dog started finding things which she brought to him so he would kick them along and she would fetch.

Now Chloe brings each day’s “find” back to their home in Gallowstree Road, where she promptly pops it down by the bin.

Some of her more unusual finds have included a trainer, a woman’s stiletto and part of a deer skull.

Michael, 74, and his wife Margaret, also have three bucketfuls of old cricket and tennis balls which their dog has recovered. He believes that one of the golf balls she found dates back to the Sixties.

Michael, a retired headmaster and a trained historian, said: “It’s not really conservation work or litter-picking — it’s just because I don’t take a ball out for her. If she picks something up and brings it to me I will kick it along for her. She will then bring it all the way home and drop it by the bin.”

Margaret, 72, said: “Chloe is highly intelligent and does not approve of people dropping litter.

“In the afternoon she gets to play with a ball and chucker but in the morning walk she will clear all the disgusting things people drop. Plastic bottles are her favourite but she picks up rusty cans and balls of any descriptions, many of which are old cricket balls.

“The cans must taste disgusting but she brings them back and drops them near our bins, which I think is exceptional.

“You can’t really say she disapproves of people dropping litter but I think she should have a medal for the amount of work she has done clearing the common.”

The Macleods, who will celebrate their golden wedding anniversary in August, moved to Sonning Common in 1974 before relcoating to Peppard in 1982. They have two grown-up children, Kate and Alex, and two grandchildren.

Margaret, a retired nurse and health visitor, said the family had had dogs before but they did not compare with Chloe in terms of intelligence.

She thinks Chloe’s unusual parentage helped her to be particularly intelligent. Margaret said: “Her mother was a working border collie and her father was a black Labrador, so she has traits of both.

“The working bit has to be where she has got her high intelligence from but she also has Labrador traits like enjoying food and thinking about it the entire time!

“Chloe does agility classes in Goring and she learned all the commands within months. Collies go stir crazy in the winter months so I teach Chloe new tricks in the winter before it’s warm enough to do classes again.”

Some of her tricks include showing where her treats are when prompted and completing a maze for which she receives a treat.

Fellow residents of Peppard and the parish council will be pleased about Chloe’s efforts as there are often complaints about the village being used as a dumping ground, usually due to people throwing rubbish out of their car windows.

In 2011 Chloe had a litter of six puppies, so perhaps there are dogs across the country cleaning up their areas too!