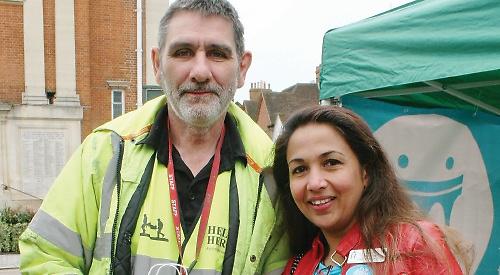 COULD the Happy Henley initiative prove just the tonic to heal the town council’s political rift?

At the launch of the event on Friday Councillor David Eggleton, of the ruling Henley Residents Group, presented a bunch of red and yellow tulips to Conservative councillor Sara Abey.

The flowers had just been given to him by a stranger as an act of kindness for the international Pay It Forward Day, which Happy Henley was celebrating.

He was supposed to keep them and “pay forward” something different but decided it would be a fitting gesture in light of recent discord between the two parties.

There have been numerous clashes in the council chamber including one in January in which Cllr Abey was accused of looking at her phone during a debate.

David said: “They’re given with love. I have to say I came over all emotional when I handed them to her.!

“For my act of kindness I would like to promote the new support group for single parents in Henley, which you can find on Facebook as ‘H-O-T Single Parents’.”