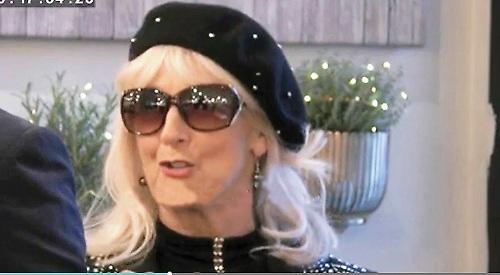 The 75-year-old, of River Terrace, Henley, sparked a flurry of compliments on social media after last week’s episode of the Channel 4 matchmaking show.

Mrs Butt, who has been single for 13 years, turned up for her dinner date wearing sparkling black from head to toe with matching beret, choker and sunglasses.

She was paired with Gray, a 72-year-old dance instructor who arrived at the London restaurant on a scooter but was flatly unimpressed by her passion for travel and new experiences.

At the end of the evening Connie declined to meet him again, saying he was “nice” but “boring”. On Twitter, Sophie Richardson wrote: “When I grow up I wanna be like Connie — fierce and fabulous.”

Chanice Hird said: “I need Connie to come be my stylist! 75 and she dresses better than me!”

Ruth Kennedy wrote: “How adorable and hot is Connie? #agelesswonder”.

“Dorothy” simply said: “Wow, hope I look as good as Connie when I reach her age.”

Andy Miller said: “Liked Connie from the off but after hearing what she’s been through I think she’s amazing! Whoever gets a Connie in their life is a lucky fella.” Others attacked Gray, who dismissed his date’s suggestion that he should have a “bucket list” and criticised her smoking habit.

Emma Sawyerr tweeted: “You’ve probably had a salad more interesting than him. Don’t bother. What was the point of arriving on a scooter if you’re such a bland and curmudgeonly man really?”

Caroline Docherty wrote: “This man would bore me to tears, you deserve a medal, Connie!”

Kayleigh Davies said: “Oh gosh, no Connie love, he doesn’t have the same fire you do, hun. Next.”

Mrs Butt, who watched the episode with 40 friends and relatives at the Anchor pub in Friday Street, was modest about the praise.

“I’m very surprised as I only had a black top and trousers and didn’t think it was a particularly striking outfit,” she said.

“It was fun watching the episode, although I came across as pretty bored because the date lasted more than two hours and they mostly showed bits from the end.

“Gray had shown no interest in any of my suggestions so I was starting to lose my sparkle.

“My friends enjoyed watching it but they all agreed Gray wasn’t right for me. I’ve since had loads of phone calls from people who saw it, including my sister who’s on an army base in Cyprus.”