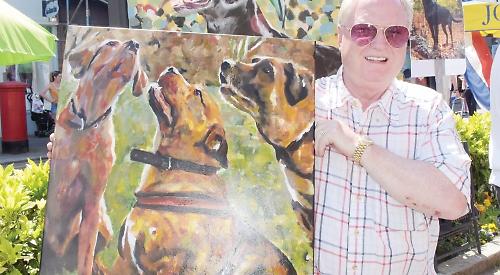 The affable entrepreneur began in 2006 when he painted his Labradors Humphrey and Kipling and has since completed another 999 pictures in a variety of media including pastels, watercolours, airbrush, oils and acrylics.

His 1,000th portrait depicts three dogs, Cooper, Lulu and Arthur, whose owners he got to know on dog walks along the towpath in Mill Meadows.

He displayed it on his stall at the Henley May Fayre last month and also made full-sized prints of the 60cm by 60cm canvas for each of the three owners.

Clive, who lives in Hart Street and owns an advertising agency in Marlow, has been a keen amateur artist since he was young.

He used to paint mostly people but began to focus on animals after Humphrey nipped a fellow dog owner while accepting a treat. By way of apology, Clive offered to paint the woman’s poodle-cross.

The woman was so impressed that she wrote to the Henley Standard, which then commissioned him to paint six free dog portraits as a reader offer.

However, Clive painted all 78 entries and then about the same number again when the offer was repeated the following year.

The rest of the paintings have been either for friends or charities including the Helen and Douglas House hospice shop in Henley. He has also offered paintings as prizes in the Henley Standard’s Top Dog competition.

Clive used to take about four days to complete each painting but as he has gained more experience he has cut that time down to a day. He works from photographs which he displays on an iPad next to an easel at his home studio.

He says: “I try to do two or three paintings at a time if I can. I’ll just line them up in front of me and begin. I suppose I’m not that creative, really — I’m just copying the photo.

“At least a quarter of the portraits have been of pets that have died. It’s sometimes hard as you have to use your imagination when the only photo you have is of a pair of ears but it helps owners to heal from their loss. They’re not always masterpieces because of the guesswork that’s involved but some of them have been fantastic. I didn’t set a goal of painting so many but once I did the portraits for the Henley Standard word spread and once I had enough to put a website together I could show people what I could do and they could choose one in a style they liked.

“It has cost about £30,000 in canvasses alone and I’ve done more than three-quarters free of charge in exchange for donations to charity. I’ve just had to grab as much money as possible from my wealthier friends!

“It’s funny because I was getting really excited as I got nearer to 1,000 but now I’m almost a bit deflated as it doesn’t feel that much of a big deal.”

Clive will continue painting dogs but he also plans to create a portrait of Henley Bridge illuminated by the 1,600 LED lights that he attached to it earlier this year without planning permission for which he could still be prosecuted despite many people praising his initiative.

He would like to sell copies and put the proceeds towards repairing the listed bridge’s stonework, which has been damaged by years of boat collissions. For more news of this, watch this space...