We watched film car crash into our pond 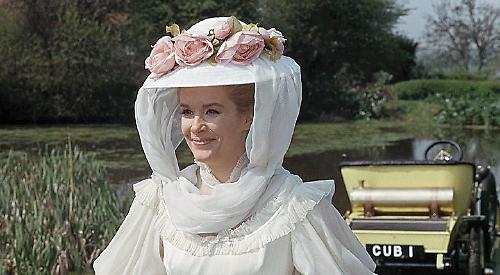 THE return of the original Chitty Chitty Bang Bang car to the Henley area brought back fond memories for Bob and Jan Warner.

The couple were among the hundreds of people who attended a party at the Five Horseshoes in Maidensgrove to mark the 50th anniversary of the film, some of which was shot in the Hambleden valley.

Also among the guests was GEN 11, one of six models built for the original production and one of only two that is capable of being driven. It was on loan from broadcaster Chris Evans, who bought it in 2012.

Bob and Jan first encountered it in 1968, when a key scene was shot at the pond outside Pond Cottage in Russell’s Water, which they had moved into after marrying a few years earlier and is still their home today.

The crew spent several days filming a sequence in which leading lady Truly Scrumptious, played by Sally Ann Howes, crashed her car into the water after swerving to avoid youngsters Jeremy and Jemima Potts. The children’s father Caractacus Potts, an eccentric inventor played by Dick van Dyke, then dived in to rescue her.

Mr Warner said: “They told us in advance and spent quite a while in that particular spot. I remember they had tutors for the children so that they could still have an education while they were working.

“The car would come around the corner before crashing into the pond right in front of the house. They had to do a lot of takes so Dick van Dyke was changing his trousers over and over again because he needed a dry pair every time. It would have looked odd if he’d had water marks before jumping in.

“Between takes, the actors used to sit in our garden and talk to my parents Jim and Ethel. They were nice and friendly and really quite normal — you would never have thought they were film stars. Dick seemed to spend a lot of time at the old Bee Hive pub round the corner, which also doubled as a dressing room.”

The Warners have since appeared in several television shows including ITV’s After They Were Famous in 2004, in which Van Dyke, Howes and former child actors Adrian Hall and Heather Ripley revisited the scene.

The car, which was then owned by Pierre Picton, of Stratford-upon-Avon, also returned and came back again a few years later when the village hall committee launched a playgroup named after the film.

Mr Warner said: “It’s made the village popular with people from all over the country and they make pilgrimages here just to see the pond.”