Milliner to Mrs May 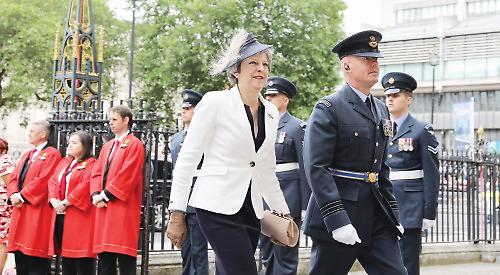 HENLEY milliner Liz Felix has surely secured the title of “hatmaker to the Prime Minister”.

Theresa May has been seen in yet another of her creations, this time at the Westminster Abbey service to commemorate the 100th anniversary of the RAF.

Mrs Felix, whose business and shop is in Reading Road, said Mrs May popped in a few weeks ago and chose the navy hat featuring quills and a large, fine brush rosette and large button in the middle.

She says: “The PM was looking for something that was versatile, wouldn’t cover her face too much and was easy to wear.

“It’s a slightly quirky hat and when it was in the shop lots of people loved it as I had lots of comments about it, which I was quite pleased with. It was lovely that she chose that one. It is is quite versatile so she’ll be able to wear it again.”

Mrs Felix also made a white hat with a rounded crown, downturned wide brim and an orange silk flower that Mrs May wore at Henley Royal Regatta in 2016.

A few months later, the PM wore another of her creations — a  black felt hat with an angular crown and upturned sinamay brim — at the Remembrance service at the Cenotaph in London.

The previous year, the milliner made a red sinamay and felt hat which the then Home Secretary wore when she joined the Queen and Prime Minister David Cameron to meet Chinese president Xi Jinping during a state visit.

Well done, ladies — hats off to you both!