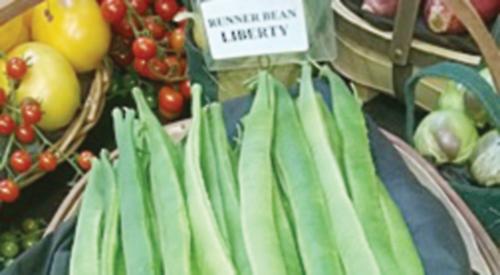 THE full story of Henley’s own variety of runner bean, created by Harry Lovejoy, can now be revealed.

Three weeks ago, I told how he developed the variety in the Sixties and Seventies at the Greencroft allotments, off Matson Drive, where they are still grown today by Dave McEwen, chairman of the allotments association.

Now there is a complete picture thanks to Graham Jones, who also used to grow them before he left Henley, and John Branham, who knew Harry and the story of his beans.

John, from Aylesbury, met Harry in the late Eighties when he visited with Mick Bradley, a giant vegetable exhibitor, of Mount View, Henley.

He remembers Harry’s runner beans being victorious at the National Vegetable Society show in 1984 when it was held in Reading.

John, who is a member of the society, says: “I know Harry won lots of big shows, including the national when it was held in Reading because I also exhibited there.

“I still grow his runner beans and have always followed his advice on reselection. It would be very difficult to keep the strain pure on an allotment site because other plot holders are growing different types which will cause cross-pollination to occur.”

Graham and his wife Barbara moved to the south coast at the end of 2016.

After being sent a copy of my article by Brian Tiptree, of Gravel Hill, he began to research the history of Harry’s beans.

Harry was also presented with a first class certificate by the People for Runner Beans in 1962.

Graham says: “When I started allotment gardening in Henley I heard about Harry’s runner beans, tried them and was delighted with the
results.”

The beans were recognised as being so good, not just for their size but also their taste.

Robinson’s Mammoth Vegetable Seeds, based in Lancashire, wrote to Harry in the late Eighties praising him for his bean.

The firm renamed it Liberty after the mother of the business’s owner. Robinson’s still sells it today, calling it “an outstanding variety for any occasion, whether for the table or exhibition”.

John still exhibits the Lovejoy strain but has not had the same success as Harry, with his top finish being a fifth place.

However, he can’t fault the bean’s flavour.

He says: “On top of being a good show bean, the flavour and texture is second to none — far better than any other variety we have tried, including Harry’s arch rival the Stenner bean.”

Graham agrees and says his favourite way to eat them is with buttered wholemeal bread and salt and pepper.

He says: “Although there is a perception that vegetables that succeed at shows are ‘all show and no taste’, this does not apply to Harry’s beans.”

The bean was recognised by the Royal Horticultural Society in 1993 when it was given an Award of Garden Merit, which assesses the performance of plants and produce under UK growing conditions.

Graham says Harry, who passed away in 1993, aged 84, would have been delighted to see them recognised with the award and now grown so widely.