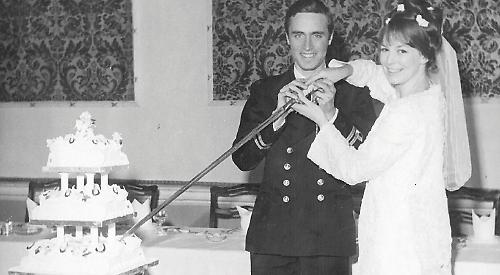 A MAN from Nettlebed has issued a belated thank-you to staff at a Welsh port after he almost quite
literally missed the boat for his honeymoon more than 50 years ago.

Peter Willis-Fleming was on his way to Ireland with his new wife Carole when they arrived at Fishguard in South Wales to find their ferry boarded and ready to leave without them on it.

The couple had been married in Chorleywood and drove to the port in a Triumph Spitfire adorned with decorations reading “Just Married” late on the evening of March 18, 1966.

Mr Willis-Fleming, now 80 and living in Park Corner, said: “A number of times I had gone across to France from Dover and normally if you are there an hour before sailing time you get on.

“I was applying the same thought to this overnight ferry to Ireland but as we approached the port area all the lights were out and I started to get a bit concerned.

“There was a gate across the road so we couldn’t get in. The ferry was lit up but otherwise everything was in pitch darkness.”

In despair, Mr Willis-Fleming sounded his car horn in the hope of alerting the driver of the ferry.

The retired businessman said: “Eventually this chap appeared on the other side of the gate. I said we had booked and would like to get on but he said he was very sorry but we’d missed the boat.

“After the initial shock I told him we were on our honeymoon, whereupon he disappeared into the darkness and moments later the lights came up, the gates opened, the ferry lowered its ramp and we drove up in.

“It was a huge relief as we would presumably have had to wait until the next day for another one.”

The couple went on to enjoy their first trip as husband and wife but it wasn’t until Mr Willis-Fleming was listening to Radio 4’s Saturday Live programme earlier this month that he decided to thank the port staff for their gesture.

He said: “I listen to the programme most Saturdays and they say it’s never too late to say thank-you. I thought although it’s very late, since 1966, I’ll do it.”

Mr Willis-Fleming had planned to recreate the journey for his wife on their 35th wedding anniversary in 2001 but, sadly, she passed away before then.

Their honeymoon remains one of his fondest memories and he is still grateful to the staff who made it happen.

He said: “We had a brilliant time. Like most honeymooning couples, we had very little money but it was very enjoyable.

“I owe a huge debt of gratitude to those people, who I assume went entirely against regulations. It restores one’s faith in humanity.”