Ernie, he drives the biggest fire engine in... his village 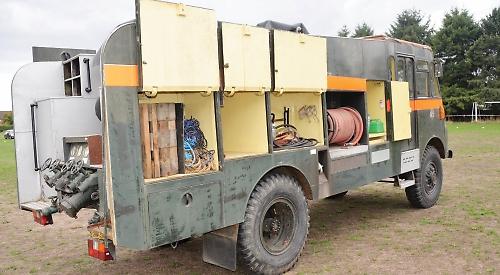 ERNIE POVEY knows how to treat himself. He bought a 1956 Bedford RLHZ fire engine to celebrate his 74th birthday in May.

Mr Povey, of Schoolfields, Shiplake, exhibited it at the village’s fifth annual Party in the Park picnic and fun run, which he organised with help from a group of volunteers earlier this month.

The vehicle, more commonly known as a “Green Goddess”, was one of more than 900 built for the Auxiliary Fire Service in the Fifties to support regular crews in the event of a nuclear attack during the Cold War.

They were not intended to replace fire engines but to serve as support units and could be linked together by hosepipes to supply large quantities of water from lakes, rivers and other sources.

Mr Povey’s vehicle, which weighs more than five tonnes empty and up to eight when its 1,400-litre water tank is full, is in good working order apart from a broken rear light and has some original equipment, including the hosepipes. It still has its main Sigmund FN5 rear pump, which can pump more than 4,000 litres per minute through four hosereel outlets, as well as a petrol-powered Coventry Climax Godiva pump on the passenger side which can pump 1,600 litres per minute.

Mr Povey, who is chairman of the 1st Shiplake Scouts, keeps the tender on his driveway.

He intends to repair a hole in the roof of the driver’s cabin, whose chassis is made of ash, and install new equipment, including original wooden ladders, before showing it at vintage vehicle rallies every summer.

Mr Povey, who won’t disclose what he paid for his “present”, said: “It got a lot of interest at the party and it’s a shame I didn’t have more time to answer people’s questions but I was so busy running around and sorting things out.

“I have no idea why but I’ve always wanted one and finally decided to just go for it. I really wanted one of the few that were painted yellow but they are a lot harder to come by and more expensive.

“I’m not going to tell anyone what I paid but I bought it on eBay from a collector in Boston and got a very good deal considering it has done less than 5,000 miles.

“The crazy thing is that when I turned 70, I automatically lost my entitlement to drive lorries over three-and-a-half tonnes but because this was registered before 1960 I can just drive it on a car licence with no HGV entitlement!

“My mileage is restricted but I only paid £88 for a year’s fully comprehensive insurance and then went to collect it from
Lincolnshire.

“I also took out £99 for one-off breakdown cover and prayed nothing would go wrong on the journey. Although there was a bit of trouble, I got it home in one piece.

“It hasn’t got power steering so the handling is quite tough but driving it home was probably one of the best days of my life. I think I’ve done well as I got a pretty full complement of kit with it. There’s going to be between eight and 10 of them at the next Bedford country fayre and I’m hoping to be able to join them.

“I had to move a caravan off my drive when I got it home because I hadn’t realised how damn big it is. It has got a 60ft turning circle and it took me about 15 minutes to park it.

“I’m not sure what the neighbours think. One of them asked why I kept it under a tarpaulin and when I said it was because of a hole in the roof, he said ‘oh, I thought you were just covering it up because it’s so blooming ugly!”

The Government mothballed the Green Goddesses in 1968 but pressed them back into service during the firefighters’ strikes of 1977 and 2002 and occasionally during floods and droughts.

It had only 40 by 2004, when the remainder of the fleet was either sold off to fire brigades in developing countries or donated to museums.