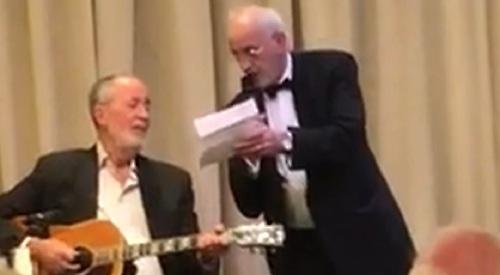 Mike, who was in the Springfields in the Sixties, was chosen as he performed at the opening of Lorraine’s Hot Gossip coffee house in Friday Street in 2007.

He shared anecdotes with the dinner guests about his career and played acoustic renditions of classic rock, pop and country songs including The First Cut Is The Deepest by Cat Stevens. He was then joined on stage by Deputy Mayor Ken Arlett, who was compering the evening, to sing a duet of That’ll Be The Day by Buddy Holly.

Ken, who had agreed to pay £50 to the two charities for this privilege, said: “I think Mike just about came up to my level! It went pretty well considering we hadn’t rehearsed at all, though he wisely left it until the end of the set in case anything went wrong.

“I enjoyed it a lot and thought I’d be tense but it was pretty relaxed and I can now say I’ve sung with a rock legend.”

Lorraine added: “When Ken came forward I jokingly offered £100 for him not to sing, which everyone laughed at, but I think he did really well.

“He really enjoyed it and I think it takes a lot of courage to get up and do that in front of so many people.”