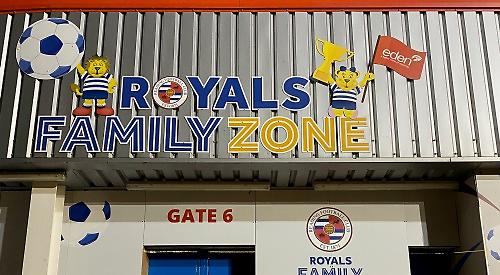 YOU are more likely to see Mark Banks with a rowing coach’s megaphone than a football scarf.

But earlier this month the director of rowing at Leander Club in Henley made the short trip to the Madejski Stadium in Reading to see the Royals take on Birmingham City in the Championship.

He wanted to take a friend’s 11-year-old foster son as an early Christmas treat as he had not been to a football match before.

Their adventure began when they boarded a bus in Hart Street in Henley with other Royals fans and by the time the bus got to Shiplake, there was standing room only.

The bus arrived at the stadium in good time for the 3pm kick-off.

The duo made their way to the Fun Zone, the club’s family-friendly area and stayed warm in the Kids’ Activity Cabin, where they played table football and games and took shots on goal.

They also sent a Christmas postcard to Reading FC players and learned that if they’ve been good, they might even get a reply. At 2.30pm they made their way to their seats in the stadium’s Eamonn Dolan stand, named after the former Reading academy manager who died in 2016.

Fifteen minutes later, a Kingsley Kids bag, ordered online before the game, was delivered to the boy’s seat full of snacks and treats, a player photograph and crayons.

Mark, who is a Manchester United fan, and his young companion, who supports Liverpool, wanted to get the most out of the experience before kick-off.

He said: “We tried to make it an experience and a special day so we really embraced it.

“By going on the bus rather than by car or taxi, we could be with the Reading fans as they made their way to the stadium.

“When we got there we went to the shop and bought some memorabilia like a football and we tried to do as much as we could.”

Despite a 3-2 defeat for the Royals, the pair enjoyed their day out. Mark, who wore a Leander hat for warmth in the stadium, said: “We were in the family stand but when they were singing songs they would also bang the seats and my young friend absolutely loved it.

“He was also very interested in Kingsley, the club’s lion mascot, and he would ask where he was when he lost sight of him.

“The football was also very entertaining, with lots of goals.

“I haven’t been to the Madejski Stadium before. I go to Old Trafford a couple of times a year and with 77,000 people you do feel cramped but at Reading the loos were clean and the refreshments at half-time were really good. It is all just really well organised.

“It was a fabulous experience for both of us.”