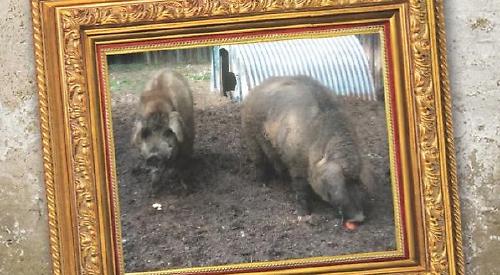 AN author has chronicled the ups and downs of keeping twin rare breed pigs who became much-loved members of the community.

Michael Richards’ seventh book Mangalitza Madness tells the story of Percy and Rupert, who lived in a 1.5-acre enclosure behind his home in Henley Road, Wargrave, for about eight years.

Each weighed about 24 stone and their pen was fenced off using railway sleepers laid upright to prevent them from escaping, which they still managed to do occasionally.

Both pigs were Mangalitzas, a breed with a thick, wiry coat that was once common in Britain, which Mr Richards imported from their native Hungary.

On one occasion, they were investigated by the Home Office after being mistaken for illegal immigrants.

Another time they were briefly suspects in a death on nearby land which turned out to be unrelated.  After eliminating the pair from their enquiries, the police would return with colleagues to show them the animals.

Maidenhead MP and former prime minister Theresa May also knew about Percy and Rupert as she is a friend of Mr Richards’ wife Patricia. She promised to visit them but didn’t get a chance before they died on the same day in December 2018.

Mr Richards was encouraged by friends and neighbours to write the pigs’ “autobiography”, which is based on the updates he used to post on his Facebook page.

The proceeds will go to the Holy Trinity Foundations orphanage in the Phillippines.

Mr Richards, 64, bought the pigs from a private seller in High Wycombe in 2010 after seeing an advert at Ladds garden centre in Hare Hatch. They were just 12 weeks old at the time and only about a foot long.

He built a small pen on his land, which adjoins the Hennerton backwater off the River Thames, and periodically enlarged it as the pigs grew to about 5ft long and 3ft tall. They enjoyed a diet of corn, apples and other produce.

“I thought they looked like sheep when I saw their photo and I fell in love straight away,” said Mr Richards. “We knew they weren’t micro-pigs and would grow quite big but we didn’t expect to have two 24-stone monsters.”

Within months of the pigs’ arrival, he was contacted by immigration officials at Heathrow Airport who said they believed he was harbouring “two Hungarian nationals”. He eventually persuaded them otherwise after sending photographs, import documents and a veterinary certificate.

Mr Richards recalled: “When they phoned me, my first question was ‘is this a wind-up?’ but the man said ‘I can assure you this is a very serious matter’.

“I offered to send photos but he said ‘how would we know they’re your pigs?’. We were on the phone for more than an hour and it still took another phone call the next day to satisfy them.

“I had all these documents but they were in Hungarian and I wasn’t sure what they all meant. They reluctantly accepted in the end but they were very coy about where they’d got their information from.”

The pair became widely known because Mr and Mrs Richards hosted barbecues at which the guests enjoyed watching and playing with the pigs.

One of the porkers’ most famous fans was Olympic rower Will Satch, who was mentored by Mr Richards at Henley Rugby Club when he was a boy. Satch visited after returning from the Rio Olympics in 2016, where he won gold stroking the GB men’s eight.

Mr Richards, who played for and managed the Hawks, wanted a photo of Percy wearing the rower’s medal but he ran off when it was placed around his neck and the men had to chase him to get it back. Mr Richards said: “It’s just as well because Will said he’d never be able to explain that it was stolen by a pig.

“Percy and Rupert were fun to play with when they were younger but as they got older people definitely became a bit more cautious and sensible around them. The pigs loved sneaking up behind you and tripping you up or they’d try to knock their water trough over you.

“I remember one time a group of about 30 young women went down to see them and came running back screaming when the pigs both broke wind in unison.

“Another time, the pigs were circling around these two big rugby players who were scared and standing on a dustbin. They asked me to distract them with some food so they could get down.”

Percy and Rupert had a fan club of more than 4,000 people from around the world on the owner’s social media channels and were popular with locals.

Mr Richards said: “They were pretty big celebrities and people would always ask how they were doing. I think people were fascinated because they’d never seen hairy pigs before.

“The team at Manor Mix Concrete in Peppard, who laid the foundations for their hut, were fans and used to sound their horn as they drove past the house. My neighbours would hear it and say ‘that’s Manor Mix talking to the pigs again’.”

Mr Richards said his pets became very gentle after he nearly died in 2015 when he contracted sepsis and double pneumonia while on holiday in Mallorca. It took him six months to fully recover after which he wrote a book about his ordeal.

He said: “To begin with, my wife had to drive me down to the enclosure to feed Percy and Rupert and they had totally changed. It’s like they somehow knew I wasn’t well and couldn’t be messed around with.

“As soon I was better, they went back to their normal selves. They’re very intelligent and sensitive animals and they could tell something wasn’t right.”

The pair fell ill just before Christmas 2018 and Mr Richards found them both dead in their pen one morning. A vet confirmed they had died of natural causes.

“There was a lot of sadness when they died,” Mr Richards said. “I knew something was wrong because they were lethargic and had gone off their food and water. It’s funny to think they were born on the same day and died on the same day but they were very close.

“There was a massive reaction and I had loads of people coming up to offer condolences, including Mrs May, who came up to me in Waitrose saying she’d heard the news. She had hoped to see them but I imagine they were a fairly low priority given the political situation.”

Mr Richards now intends to buy five more Mangalitza pigs, one for each of his grandchildren who will help with their care.

He said: “Percy and Rupert must have left an impression on me because I can’t eat pork any more. I suppose it makes me feel a bit guilty.”