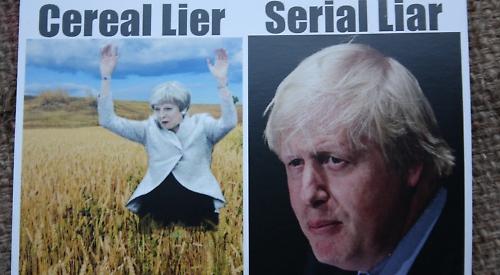 NOT everyone has seen the funny side of this postcard in the Drifters Coffee House in Duke Street, Henley.

It depicts former prime minister Theresa May in a field of wheat with the caption “cereal lier” and her successor Boris Johnson below the words “serial liar”.

The café was given some of the cards by a customer and owner Talia Maguire put one in the window.

She said a woman came in to complain and told her she would go out of business because Mr Johnson was not a liar.

Deputy Mayor David Eggleton also went in to ask for the card to be removed after “a couple of people”
complained.

Miss Maguire refused. She said: “He basically asked if we could take it down but we said, ‘it’s freedom of speech’.”

Co-owner Millie Jeans said they were not trying to be political but the card would be staying.

“People need to be more open-minded,” she said. “We’re not going out of our way to cause offence.”

So much for that post-election reconciliation.