Lazy male toads hitch a ride on other halves 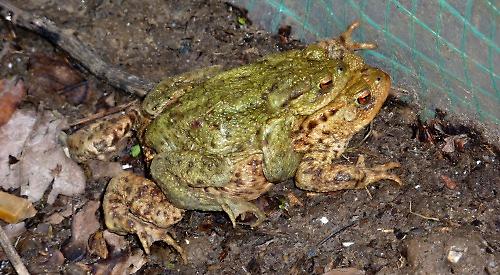 INTERNATIONAL Women’s Day on Sunday was definitely not being marked by Henley’s toads.

As regular Henley Standard readers will know, each year around this time the Henley Toad Patrol is formed to help the amphibians cross the road.

The volunteers put up a large plastic barrier along a section of the A4155 Marlow Road to catch the toads, frogs and newts as they migrate at night from Oaken Grove Wood to a pond on the Culden Faw Estate on the other side of the road where they reproduce.

Instead of being squashed by passing traffic, the creatures are carried across in buckets by members of the patrol.

So what has that got to do with women’s equality, I hear you ask?

The answer comes from Professor John Sumpter, a founding member of the patrol and head of ecology at Brunel University.

He explains: “At the beginning of the spawning migration in early February, almost all the toads collected by the volunteers at the barrier were males.

“We call these single males — they want to get to the pond early in order to be in prime position when the female toads start arriving. However, other male toads use a different strategy — they hitch a ride on a female. Thus, when many of the female toads reach the barrier, as they are doing in high numbers currently, they are already paired with a male. We call these pairs of toads.

“The smaller male climbs on to the back of the female and clasps her tightly. Scientifically, the two toads are said to be in amplexus. The male toad has specially developed pads on his front legs that help him grip his female in this mating embrace.

“Thus the poor female has to carry her male a considerable distance as she crawls slowly towards the pond where she will spawn.

“Each lazy male is trying to ensure that when his female releases her eggs, he will be in prime position to fertilise them. External fertilisation is the norm in amphibians.

“A relatively small percentage of female toads arrive at the barrier unaccompanied by a male. We call these single females. But they rarely stay single for long.

“If single males and single females are put together in a bucket, by the time the volunteer has crossed the road and walked to the pond, there are usually mainly pairs of toads in the bucket. Male toads obviously do not spend very long choosing a suitable mate!”

The professor says that last week was another busy one for the volunteers, with significant numbers of toads on the move whenever the weather conditions were suitable.

He says: “The relatively mild, and sometimes wet, weather recently has encouraged lots of toads to head for their spawning pond.

“Weather conditions throughout Saturday night were particularly favourable for amphibians and more than 1,000 toads, together with some frogs and newts, were collected from the barrier by nearly 20 volunteers and taken to the pond. Other nights were less busy but still nearly 1,700 toads were collected during the week.”

By the end of the week a total of 5,976 toads, 165 frogs and 169 smooth newts had been carried across the road since the operation began in
February.

This means that the number of toads has passed the average, which is close to 5,500, and the migration period is not due to finish until some time around the end of this month.

Not even the expert Prof Sumpter is willing to hazard a guess at what the final total will be.