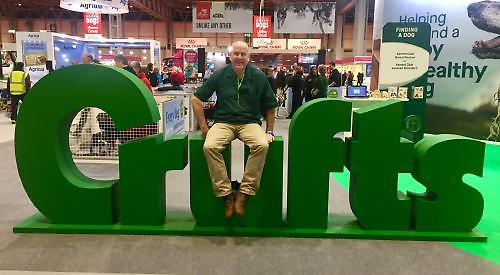 FOR dog breeders, winning at Crufts is the pinnacle of their profession.

So imagine being told that your dog’s title is to be taken away only minutes after it has been awarded.

Erik D’Arcy-Donnelly had the unenviable task of breaking the news to an owner not once but twice at this year’s show held in Birmingham earlier this month.

He works at the Henley Veterinary Centre in Reading Road and has been a member of the general vets team at Crufts for about 12 years.

One of his jobs this year was to give the winners of the best in breed categories the once-over and if they didn’t meet the Kennel Club’s strict criteria, the title would have to be taken away.

He had to break the bad news to the owners of a bulldog and a Dogue de Bordeaux. He wouldn’t reveal why except to say that in both cases the dog was not a good reflection of the breed.

There were about 2,400 dogs at this year’s Crufts, including about 200 bulldogs from which a best male, female and best of breed were judged. Erik said: “I was one of about eight vets for the best of breed categories where we check that a dog meets certain criteria. If it doesn’t meet them, then it is stripped of that title.

“An ideal bulldog, for example, would have no eye problems — the lids will conform with the eyes and not have many wrinkles in the face.

“We do have to explain to the owners why we have made the decision and the decision of the vet is final. It is not nice doing it. It must be very exciting for them to win and to have it removed is disappointing but they know it could happen when they enter the
competition.”

Erik, who lives near Caversham, joined the vets team having taken part in the show, although he never got better than third place with one of his own border terriers.

He said: “My job at Crufts involves the day-to-day checking over of all the animals to see if they have any problems.

“The usual things are a dog biting another dog or someone accidentally standing on a dog and sometimes there’s a bit of stress, vomiting and diarrhoea.”

If something does go wrong there is a full veterinary practice on site to provide treatment or drugs for the animals.

Erik said: “Every now and then you get an emergency such as a dog which has collapsed or one with heat stroke. This year we just had a few bites.

“The whole thing is about the health and welfare of the animals that are there. We want all the animals to be healthy and fit for function.”

Erik enjoys going to Crufts every year because he meets friends. He also works at about six other shows around the country.

With the UK and Europe in the grip of the coronavirus pandemic, Crufts had to be given the go-ahead by the Department for Environment, Food and Rural Affairs and the organisers had to take the necessary precautions.

Erik said: “There was lots of hand sanitiser and sanitiser stands at all the entrances and everywhere the dogs were kept but there is no evidence that dogs can get it and pass it on to humans.”