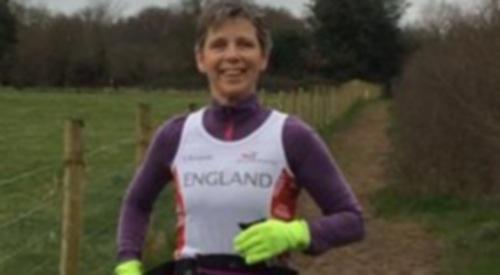 LIZ JONES knows how to make the best of a bad situation.

The 59-year-old, who lives in Henley and is the town council’s accountant, was due to make her England debut at the Fleet half-marathon but the event was called off at a day’s notice due to the coronavirus outbreak.

Her entry was already in doubt because she had broken her thumb and bruised a rib in a cycling accident near her home in St Mark’s Road.

She was on painkillers and still deliberating whether or not to take part when the postponement was announced.

Not to be deterred, Mrs Jones and her husband Howard decided instead to take a tour of London with her England vest and photograph it in various locations.

They walked around the capital with their children Kathryn and Rob and Rob’s partner Sophie Stock and enjoyed lunch at a restaurant in Covent Garden.

Mrs Jones photographed the vest hanging from various shop mascots and buskers’ music stands in the West End and from one of the lion statues in Trafalgar Square.

That evening, she took it to a performance by the Henley Symphony Orchestra at the Hexagon in Reading.

She said: “It was nice to get the family involved and give the vest a bit of an outing anyway. London was so incredibly quiet and there was a bit of a sense of guilt — we were wondering ‘should we really be out here?’ but we enjoyed ourselves.

“There weren’t many people around to ask what we were up to — it was more of a family thing and a bit of fun.”

Mrs Jones, who has been running for about 20 years and represents Reading Roadrunners, qualified for the England Age Group Masters competition after coming second in the 55 to 59 age group at the Farnborough winter half-marathon.

She came off her bike on March 6 after hitting a patch of black ice in Green Lane as she was cycling to Friar Park Stables, off Gravel Hill to turn out her bay horse, Razan.

A passer-by helped her home and she later visited Townlands Memorial Hospital, where her thumb was X-rayed and put in a splint which she can hopefully remove next month.

She subsequently attempted a few short runs and just about finished them, so thought she might be able to complete the Fleet race at a slower pace.

She is still doing short runs to exercise her chest and is waiting to hear whether the competition will be rescheduled.

She said: “My first thought as I lay in the road was ‘oh bother, I might not be able to run now.’ My ribs are still incredibly painful and I wonder if I might actually have cracked them.

“I certainly wasn’t going to get a personal best if I did run, so in that sense the cancellation was a good thing, although of course it’s a worrying time for the country more generally. After the accident I was pretty sure that I’d still do it and was running very slowly with lots of painkillers, but then the race was cancelled and I no longer had to make that decision.

“It’s obviously disappointing but I understand why it was necessary.

“I’m just waiting to hear whether it might go ahead in the autumn. I’m only a fun runner so it was quite exciting to be chosen and it would be nice to have that opportunity, though it’s an honour just to have qualified.

“They could shift the masters competition to a different event, which has happened in the past, but we’ll have to wait and see.

“Between my fall and the coronavirus outbreak it felt like someone was trying to stop me doing it!”

Also due to run for England were fellow Henley resident Caroline Hoskins, Alex Harris, from Caversham, Jane Davies and Tracey Lasan from Goring, and Seb Briggs, from Emmer Green.