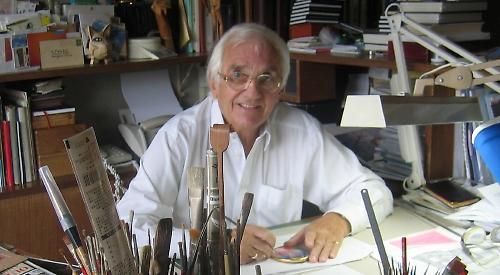 THE 75th anniversary of VE Day has brought back memories for Bill Mundy.

The 83-year-old artist, who lives off Wargrave Road near Henley, was present at the celebrations on May 8, 1945 as a child and painted this commemorative watercolour to mark the 42nd anniversary in 1987.

His piece, entitled We’ll Meet Again after Dame Vera Lynn’s famous song, depicts an arrangement of about 40 items of wartime memorabilia on his bureau.

Some of the artefacts were from his own collection while others were donated or loaned to him after Bill made an appeal in the Henley Standard.

They include a gas mask, tins of anti-gas ointment and air raid window sealing tape, which he remembers having to use during German air raids as a child.

There is also a photograph album which includes a shot of his late brother Bob as a child as well as his uncle Frank Carter, who served as a fireman in Wokingham. Other items include a signed certificate issued by the Queen to every family who took in an evacuee, three service medals, a ration book, cigarette cards, shoulder badges, an identity card, a small portrait of Winston Churchill and the sheet music for We’ll Meet Again.

They are wrapped in a large Union flag which Bill still owns and will be hanging from his window in celebration today.

The painting, which is about 2ft long, was exhibited at the Royal Academy’s summer exhibition, then purchased by a Swiss collector and is still owned by his widow.

Bill says: “It’s probably the most enjoyable one I’ve ever made because it brought back so many memories while I was painting it.

“When it was exhibited, I was contacted by a squadron leader who noticed the colours on one of the ribbons were the wrong way round, which shows how people studied all the items very closely.”

Bill was aged four when war broke out and his father Percy went off to fight in Gibraltar, leaving him and Bob with their mother Vera and grandfather Thomas.

He recalls watching dogfights over the skies near their home in Wokingham and collecting small pieces of debris or traces of gunpowder which they would throw on the bonfire on Guy Fawkes Night.

Later, Canadian troops set up camp a few miles outside the town and Bill and his friends would follow them back while marching. On one occasion, a soldier let them take home a chocolate bar.

Bill recalls “We hadn’t seen anything like it in years. I took it home and my mother would cut a single square into quarters for us every Sunday so that it lasted as long as possible.”

When the war ended, the families in his street held a large party.

“It was all very exciting to us,” says Bill. “There were trestle tables all the way down the road and all the mothers made cakes and other things we hadn’t seen in ages. They’d hoarded enough supplies for the occasion. We all had little flags to wave.

“By that point I was old enough to understand what was going on. It was a real relief for the adults and the children were glad to see them happy again.”

Bill, who went on to serve as an Army cartographer during the Malayan Emergency, says celebrating VE Day 75 years later is as important as ever.

He says: “It was a very tough time for the country and in the early days of the war, when we were fighting alone, it could have gone either way. I remember seeing the orange glow from my mother’s bedroom window.

“The efforts and courage of the soldiers who fought for this country’s future should always be remembered.”