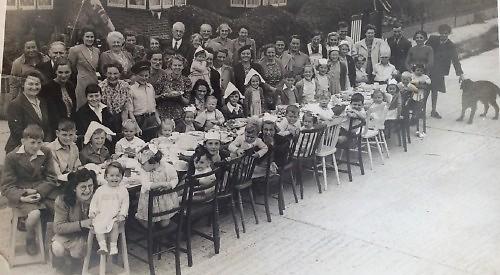 A WOMAN who was present at the original VE Day celebrations in Henley hopes readers will recognise themselves or their parents in this photograph of the occasion.

Jan Warner, who grew up in Greys Road with her parents John and Bessie Eyers, was just three when she attended the festivities organised by her neighbours in Greys Hill.

She can’t recall the party as she was too young but remembers the faces of some people who appear in pictures that her parents kept copies of. The images have  been in an album at her home in Russells Water, where she lives with her husband Bob, for decades.

The young Mrs Warner appears in one picture sitting on her mother’s lap and she can recognise the mother of her childhood friend Jennifer Truss.

She thinks another woman may be a Mrs Topsom, whose son Norman served as a chargeman on the Henley branch line for more than 50 years.

A second shot depicts mostly older children and teenagers while a third shows residents enjoying lunch at a long trestle table with Union flags draped on properties in the background.

Mrs Warner, 77, whose father served as an aircraft mechanic at Reading Aerodrome in Woodley during the conflict, went to Henley National Infants School in Gravel Hill, Trinity Primary School in Vicarage Road and Henley Secondary Modern School in Gillotts Lane.

She first met her future husband when she was 17 and they were married at Holy Trinity Church in Church Street before moving to the property they still share today. They have two children, Rob and Richard.

Mrs Warner said: “I don’t remember the party as I was far too young and I’m not sure why we were in Greys Hill as I think we were the only guests from Greys Road. I’m also not sure why there are so few men in the photographs, unless a lot of them were still waiting to be demobbed at that stage.

“I know the children of many women in that photo still live in the area and I’m still in touch with some of them. I don’t remember their mothers’ names but I do remember their faces.

“I’m sure their children will be delighted to see the pictures and I hope this brings back a lot of memories.

“My parents always kept everything so these have been in an album forever and, with times being as they are lately, I’ve had a lot of time to go through them all.”

Last weekend the Warners took part in a VE Day celebration in their village, which was decorated with bunting for the occasion and recordings of wartime anthems were played over a public address system.

Mrs Warner added: “It is funny to think how much time has passed since that first party, even if I don’t have any memories of it.”

Meanwhile, Heather Clark, of Elizabeth Road, Henley, recalls a street party in Croxley Green, Hertfordshire, in 1945, where she then lived. Last Friday, she joined in with the VE Day celebrations by having a drink and talking with her neighbours.

Mrs Clark is the little girl sitting behind the table, sixth from the left, and her mother, Daisy, is standing behind holding a plate of cakes.

She and her husband Tony moved to Henley from St Albans in 1972 when their children, Alison, Marion and Richard were still young.

Mrs Clark was a primary school teacher in High Wycombe and her husband worked for a computer company in Reading.

After the war, she lived in Croxley Green with her mother and grandmother Nora. Mrs Clark said: “I have had the photo ever since my parents died and I keep it in the cupboard with the other family photos.

“I was only a little girl, so I can’t really remember anything about the celebration.

“My father Ted was away in the Far East and my mother and I lived with my grandparents. I was the only child at that stage and I did have a brother and sister after that, David and Janet.

“I had a nice life and I was the centre of attention and we would go there quite a lot after the war for holidays.

“It was a nice rural area with woods behind the house.”