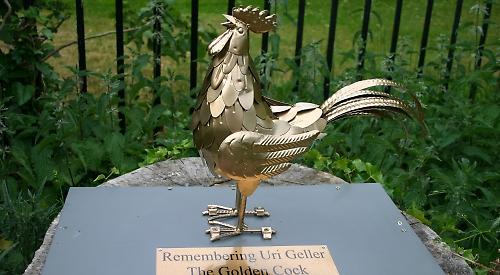 AN unconventional tribute to magician and self-
proclaimed psychic Uri Geller has appeared near his former home in Sonning.

The statuette of a crowing cockerel was installed on Saturday on a stretch of the Thames towpath off Thames Street, a short distance from Geller’s former home at Sonning Court.

It stands on the same tree stump where the entertainer unveiled a statue of a giant bent spoon, in honour of his most famous trick, before he left the village for his native Israel in 2015.

This was vandalised and removed later that year and was briefly replaced with an actual bent spoon. The new statue is the latest in a long-standing tradition of anonymous art installations in Sonning, many of which have appeared on its historic bridge or the roundabout between Sonning Eye and Playhatch.

It is mounted on a plaque with the inscription “Remembering Uri Geller — The Golden Cock”.

Perhaps surprisingly, the gesture has delighted Geller, who tells me: “The power of my mind is awesome. I have wild cocks running around my museum in Old Jaffa. Sending love to everyone, much energy — Uri.”