Artist paints Henry VIII and his six wives in miniature 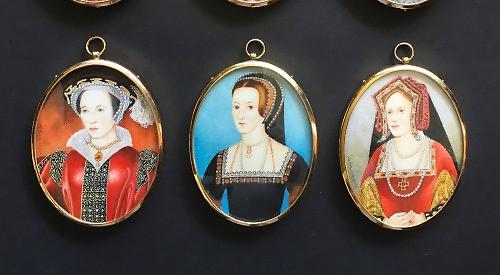 ARTIST Bill Mundy went back in time during the coronavirus lockdown.

He reproduced miniature paintings of Henry VIII and his six wives.

Bill, 83, is particularly interested in Tudor history as it is the period where miniature paintings really took off.

He based each of his works on original paintings but added his own embellishments and changed their backgrounds to suit his style.

Bill says: “Tudor time was really when miniature painting started with the likes of Holbein. It was a great period and I love to read about the time and other artists such as Nicholas Hilliard and Samuel Cooper.

“I painted from original paintings but I’ve changed the shapes and colours and things like that.

“The Henry is about twice as big as the miniatures of his wives, not least because he was probably twice their actual size.

“He used to wear several different outfits for portraits and the one I have done is a blend of two.

“It is actually the second portrait as the first one I tried I wasn’t happy with.” The award-winning artist uses a technique known as pointillism, which involves applying small strokes or dots of colour to a surface which, from a distance, visually blend together.

It took Bill 40 hours to complete each of the miniatures of the women and twice that time for the painting of their husband.

This is not the first time he has painted Henry.

The last time was in 2007 when he was one of 100 artists who painted live on the BBC’s Big Event in Trafalgar Square. Each artist was given 3ft square to create a portion of one large portrait measuring 10m by 5m. Bill produced a 1.6in miniature portrait of Henry on vellum, which was placed on the ring finger of Henry at the end of the programme.

“I have always had an interest in him,” he says. “I have no idea what Henry’s real character was but he was certainly more arrogant and fatter as he got older.

“I suppose his eyes have always been penetrating.

“I love painting costumes and different materials and differentiating between the modern, such as denim, and the traditional or historic because they are much more intricate in the design and more challenging.

“For example, the last miniature portrait I did was of Jacob Rees-Mogg and he always wears a double-breasted suit, which is not very interesting to paint.”

Bill, who lives in Wargrave Road and paints all day every weekday, has also been tackling a couple of projects much closer to home.

He said: “I’ve done a pencil drawing of Henley market place, which is about 28in wide. It is from a postcard and shows from Hart Street to Market Place. I think I found the postcard on something like Facebook and used that — I think it’s from the Edwardian times.

“Lots of people have postcards of old Henley and I did it for my own amusement really. It took me about a week to do.”

He is also about to complete a painting for Henley Bowls Club, which depicts about 75 bits of bowling memorabilia.

“I am almost definitely going to give it the club,” says Bill.

He is now thinking of doing his own versions of famous paintings or self-portraits, such as the Laughing Cavalier by Frans Hals or works by Van Gogh, Gauguin and Rembrandt in their style.

Bill said: “Van Gogh used very thick oil paints with a broad brush, not like the way I paint, and Gogan used big flashes of colour.

“Gogan’s portraits are not particularly good but his paintings in the Caribbean were.

“Van Gogh used big daubs of colour whereas my style is pointillism in miniature with lots of dots which brings out the white in between and makes them vibrant, so it will be a challenge.”