Charles I back at Red Lion Hotel after nearly 400 years 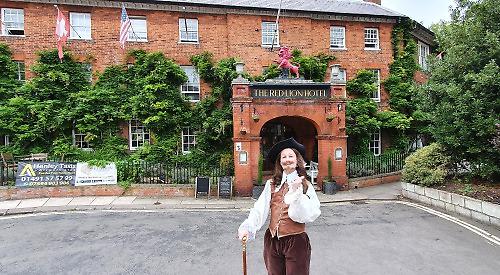 CHARLES I has returned to the Red Lion Hotel in Henley — nearly 400 years after his last visit.

The king, alias impersonator Daniel Williams, stayed in the “Charles I room”, which has his coat of arms from 1632 painted above the fireplace.

This was only discovered during renovation work in the 1800s.

Daniel, 47, a DJ from Sutton Coldfield, tours the country dressed as the Stuart king, who was defeated in the Civil War and later executed.

When he heard that there were plans to convert the Hart Street hotel into a care home, he arranged a hasty visit before he lost the chance.

The plans have since been scrapped but Daniel went ahead with his visit anyway.

When he arrived he got changed in his car so he could enter the hotel in character.

Daniel said: “It was just brilliant shocking Iona, the receptionist. She pretty much guessed who I was — it is good to know that I looked like the person I was portraying.

“A lot of people were gobsmacked to see me. When I was standing outside, someone at the Angel on the Bridge pub opposite said, ‘There’s King Charles over there’.”

He said he was thrilled to stay in the room and see the coat of arms, adding: “You can still make out the lions of the crest.

“Seeing and spending time in amazing history and being so close to the king was such a pleasure.”

To transform himself into the king, Daniel puts on a wig, fake beard, moustache and eyebrows in addition to period costume.

“It is a great look to pull off — it is very theatrical ,” he said.

“It doesn’t take long to get into character. When you look at his 17th century portraits he doesn’t smile but back then nobody smiled because you would be considered barmy.

“One of the first times doing it I was in Oxford and someone came up to me and asked if I was from a panto and I said, ‘No, I’m King Charles’. I do try to put on a regal voice.”

Daniel has spent two years travelling the country as Charles, visiting the places where the king went and spreading his story.

Last year he travelled to Althorp House in Northampton to meet Charles Spencer, a descendant of Charles, and in January he appeared at the Nantwich Holly Holy Day, a re-enactment of the 1644 battle between the Parliamentarians and Royalists during the Civil War.

Daniel said: “I am an historical interpreter re-treading his footsteps, bringing his history to life and supporting the great historical heritage out there that he knew.

“For me, it is about putting people in touch with history as for some people, reading a textbook can be quite bland.”

The real Charles I came to the throne in March 1625 and quarrelled with Parliament, which sought to curb his royal prerogative.

The King believed in the divine right of the monarch and was determined to govern in his own way. After marrying a Roman Catholic, he was mistrusted by other religious groups.

From 1642 he fought the armies of the English and Scottish parliaments in the Civil War. When he lost, he refused to accept a constitutional monarchy and was imprisoned.

He was later tried, convicted and then executed for high treason in January 1649.

The monarchy was abolished but restored by his son Charles II in 1660.

Daniel said: “I’ve always loved history and I studied the Tudors and others but I really liked Charles because he was an underdog and was somewhat misunderstood.

“He came to the throne at a time when the country was rapidly changing out of recognition.

“There was conflict in religion and Parliament was rebellious and the relationship between it and the King was stretched to breaking point, leading to civil war.”

Daniel, who is now writing a book about his experiences, added: “At this time, with the struggles of the covid-19 pandemic, places like the Red Lion are in need of support more than ever.

“When normal life resumes I would love to make a proper appearance in Henley, maybe as part of a heritage week or event. It would be an honour to return.”