Electric bike is good for me and town, says estate agent 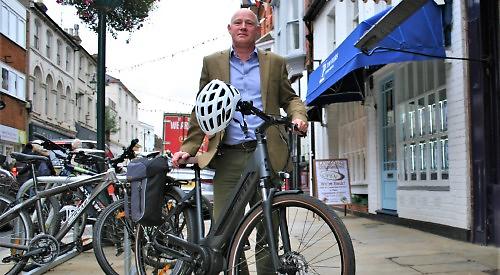 A HENLEY estate agent is reaping the benefits of swapping his car for an electric bicycle.

Tim Peers, who runs the agency of the same name in Duke Street, now zips between appointments on a £2,000 Scott/Bosch bike purchased from Henley Cycles over the road.

The 59-year-old, who lives in the Hambleden Valley with his wife Lindsay and grown-up children Ben and Ellie, also uses it to commute to and from work.

He says clients are surprised when he doesn’t turn up in a car but it hasn’t affected business and he is now much fitter after doing it for several months.

Mr Peers is also pleased to be helping fight air pollution in Henley, where levels of harmful emissions have been well above the minimum safe limit for years.

He came up with the idea in April, about a month into the coronavirus lockdown, when he noticed there were far fewer cars about and the air was clearer.

Because most of his viewings are in or just outside Henley, he says it’s sometimes quicker to cycle past traffic than to queue in it.

He will still drive to appointments further afield and commute to work by car in the depths of winter but will stick to the bike wherever he can.

The machine must be pedalled but is boosted by an electric motor which can achieve a top speed of 15mph. This is powered by a battery which Mr Peers recharges every few days.

He said: “We do 95 per cent of our business around the town and there’s so much stopping and going when you’re in a car.

“I’ve realised that’s ridiculous, especially when there are signs in shop windows urging you to turn off your engine.

“I’m of a certain age and needed to get more exercise but the thought of going to a gym fills me with horror. I don’t think the ‘no pain, no gain’ mantra would ever work for me.

“I’m not the sort of person who would do long rides in their spare time but this is a much more natural way of burning the calories while having fun. I feel so much more healthy and energetic.

“I’ll actually stop and talk to people while I’m out and there isn’t that temptation to make or take phone calls when you know you shouldn’t.

“You also notice the world around you more — it’s nice not to be so distracted.

“When I turned up at one valuation in Shiplake, the rain was hammering down and I was soaked in my Barbour jacket. The client couldn’t believe I’d come on a bike but I still got the instruction.

“I think more people are wondering why someone needs to turn up in an Audi estate because they’re just paying them to put petrol in it. I’d be lying if I said I’ll never drive again but I’m certainly going to do it a lot less.”

Mr Peers, who grew up in Henley and has been trading in the town for 25 years, said his recent experiences had taught him to have consideration for cyclists.

“You often hear people moan about them using the middle of the roads near Hambleden but you realise they’ve got no choice because they’re in such a terrible state,” he said.

“One benefit of the coronavirus outbreak is that we’re all more aware of the impact of traffic and want to keep the air as nice as it was a few months ago.

“It sounds morbid but the outlook for our environment isn’t pretty unless we do something about it.

“Other agents might tease me, but by cycling I feel I’m doing both myself and Henley a favour.”