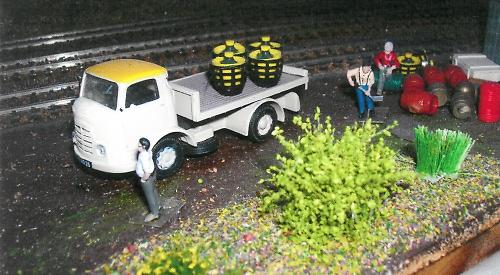 A LIFELONG model railway enthusiast has built a replica of Henley station as he remembers it in the Fifties and Sixties.

Rev Canon Clive Price, who grew up in Peppard and attended Henley Grammar School, began making it more than a decade ago and has added to it periodically.

It is not an exact duplicate but it has three “island” platforms with several lines and sidings, a goods yard, signal box and canopy at the end of the line, just as the old building in Station Road did.

The model, which is about 12ft long and 2ft wide, also has a humpback road bridge crossing the line to represent its real-life counterpart at Mill Lane.

It was made using Peco electrified model track and has several trains which can run up and down it. These include a Great Western Railway Manor class steam train with carriages and an early GWR railcar, both of which were used in Rev Price’s youth.

It also includes a flatbed truck being loaded up by workmen, some picnic tables where passers-by are resting and a backdrop of the River Thames painted by Rev Price’s wife Jennifer, who died earlier this year.

He keeps the model in a spare bedroom at his flat in Berwick-upon-Tweed and could one day extend it to include a model of the railway bridge between Shiplake and Wargrave.

Rev Price, 78, started his career as a weights and measures officer with Berkshire County Council, where he met his wife, before being ordained in 1969 and becoming a curate near Amersham.

He left the area some years later to take up posts around the country and settled in the North-East after accepting a job in Newcastle in the Eighties.

He had a model railway set as a child and got back into it as an adult, though he sometimes struggled to balance this with his work commitments and he could only focus on it fully once he retired in 2007.

Rev Price fondly remembered his youth in Henley, when he and his friends would congregate at the station snack bar run by Lilian Leigh, grandmother of current Deputy Mayor David Eggleton.

They would go there while waiting to attend jazz concerts at the hall opposite, now the site of a car park and public toilets.

Rev Price says: “It was my ambition to build Henley station, or something inspired by it, for a long time.

“Lil was a great character and her bar was such a lovely place that served a great bread pudding. It had a jukebox and we’d all mix with the local Teddy boys but, despite the image they had, there was never any trouble or aggression.

“You’d see the steam trains coming in from the Thames towpath, which we called the ‘promenade’ back then, so it was a big landmark.”

Rev Price bought pre-made buildings like the signal box but made other structures, like the platforms, by cutting out cardboard shapes and painting them.

He missed out some features like a turntable because he didn’t have room for them.

He says: “The main station building doesn’t look like the real one did but it’s similar. It’s very hard getting these things exactly right because you’d need so much space.

“I’d love to make a scale model of the actual building one day but I’m not sure I’ll ever have the time or the skill. I’m still pleased with where I’ve got to, though, because it conveys the spirit of the original and brings it back in mind.

“I haven’t been back to Henley in many years now and I have mixed feelings about returning. Sometimes I think it might be nice but I imagine a lot has changed and I don’t want to spoil my memories.”