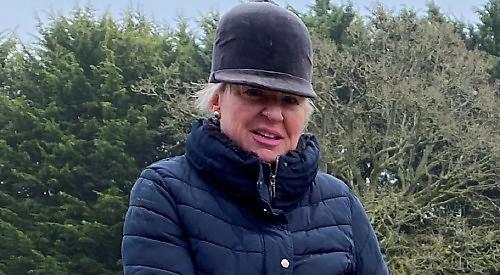 I NEED to start with an apology to two walkers near Binfield Heath from Mrs Spain and myself. Before I do, I had
perhaps offer some form of defence or explanation.

You see, Mrs Spain is a beautiful white Andalusian mare that I have acquired during lockdown and it would appear that she does not understand much English and neither do I understand much Spanish.

Now, I have had horses of varying degrees for most of my life and have competed at fairly high levels but this is my first Spanish horse and surely they’re all much-of-a-muchness?

Mrs Spain had been living at a farm between Sonning Common and Henley and hadn’t been ridden for some years. “She’s all trained,” said her previous owner, “I’m not sure in what but you’ll surely work her out...” And so this is where our lockdown adventure began.

Roll on a few months and Mrs Spain is progressing to a reasonable standard of walk, trot, canter and, impressively, the odd gallop. We have also acquired a trainer, who has described her as a “hot-hatch”. Remember those boy-racer cars? Well, that succinctly describes Mrs Spain.

However, life never really runs smoothly with horses and, due to lockdown, our hacking-out has become more and more curtailed.

Indeed, with the rising amount of dog-walkers (indeed I’m one myself) our hacking mostly consists of riding to the friendly local shop in Binfield Heath.

The problem with visiting the shop is that, although very pleasant and the locals seem delighted to see horses parked outside, there’s little or no opportunity for the horses to go at speed due to surrounding roads.

This had not been a problem until last week. I had ridden to the shop with my friend Rosie on her very steady and lovely (non-Spanish) black horse called Taylor and we had bought our crisps and drink when I saw a dear old friend. Both of us admiring Mrs Spain, Rosie (probably bored with the adoration) had started wandering off towards home.

Mrs Spain, being of
“hot-blooded” genes, was not too impressed with the absence of her friend.

Mrs Spain grew more impatient, stamping the ground and even produced some sort of stallion snort. Suddenly, she shot off and I soon learned, as I hung on, that she had some quite impressive Spanish moves.

These moves became even more apparent and extravagant as we “skipped” at some considerable speed down the road — mostly sideways. I was both enthralled and terrified all at the same time and did not want to stop such stylish top movements.

My goodness, I thought (or words to that effect), Olympics here we come, or will it be a dynamic role as a stunt rider?

To any equestrians reading this, we were splendidly performing two-time flying changes, only I hadn’t asked for them and they were performed in a fashion I had never seen before, let alone ridden.

And this leads to my apology.

To the stricken couple who had made the unfortunate decision to walk along this lane at the same time as Mrs Spain’s dynamic and unforeseen display, I can only apologise. I am truly sorry for the flash of white that pushed them to take refuge in a hedge and, to this day, I remain unsure as to whether I saw the whites of their eyes, the whites of Mrs Spain or the whites of my knuckles!