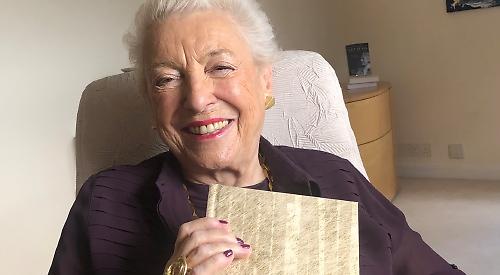 LYNN HART is a media and PR executive and lives in Henley. She was born at Townlands Hospital 61 years ago last month.

AS Valentine’s Day approaches, I can’t help thinking back to this time last year when I was busy planning my 29th party for Hart to Heart — parties for single professional people.

Little did I know then that it would be the last one for 18 months and longer.

Having 48 people (50/50 men and women) together for a party at Hotel du Vin in Henley now feels like a world away. There is always such a good mix of new and familiar faces and the room buzzes with people getting to know one another.

I’m very proud that since I started H2H seven years ago, four weddings have happened and I’ve lost count of the number of relationships. I miss it very much, but I’m confident the parties will come round again. We just have to be patient.

I feel for everyone who has suffered in lockdown — the 112,000 people who have died in the UK alone, their families and friends, those coping with long covid and other illnesses that can’t be treated.

I think of people living in high-rise flats with no garden and single parents. There are too many people in far worse situations than us here in Henley. We are so lucky.

Lockdown is a very different way of life and I feel almost guilty saying it, but I’ve really enjoyed it. I am incredibly lucky in that I still work — work I love to do and that makes every day feel worthwhile.

For the last 20 years I have worked for myself from home and absolutely love it.

My current role is with Dame Stephanie Shirley or “Steve”, as she likes to be known. An incredible lady whom I’m lucky enough to have known for nearly 20 years.

For the last nine years, I’ve been doing PR and marketing as well as organising and attending her events. It’s the best job in the world. Normally, we’d be travelling to and from speaking events every week, usually London but sometimes further afield and we both miss that a lot.

Today, thanks to the beauty of Zoom, some speaking events have gone ahead as planned, albeit virtually. In the last six months, Steve has spoken in Germany, Chile, India and Western Australia, all without leaving the comfort of her home.

After the first lockdown in March, we knew what was needed and set up her office rather like a small studio with a monitor, PC and lights. It has been a learning curve recording and editing the films, getting the lights right, but hugely rewarding too. Occasionally when covid restrictions meant we couldn’t both be indoors, we even used the garden.

Early in lockdown, Steve decided to write a book and we self-published an anthology of 30 of her speeches over the last 40 years. It was hard work but great fun finding the design team to work with, choosing the cover, the colours, the fonts, layout, photographs and so on.

We launched So To Speak on November 1 and have been thrilled with the response so far. All proceeds go to Autistica, Steve’s autism research charity, and we’ve sold nearly 1,000 copies.

In the last week I’ve been talking to The Development Agency, which is making a big screen film of Steve’s memoir Let It Go. It has been on hold during lockdown but is now starting to pick up again as they talk to the big names: Warner Brothers, Lionsgate, Pathé and others. We are starting to feel optimistic again.

I’ve discovered that I still love to learn. Thanks to Zoom, I have done regular training sessions for social media. Helen Parry is the Instagram Expert, (she happens to be local) and she has held several power hours in lockdown, often having more than 200 people log on from around the world.

I have so many photographs and videos of Steve that I’ve taken over the years and really enjoy the editing and creation of posts, stories and reels for Instagram, Facebook and so on. Instagram allows you to build a “community” and it has been a real pleasure getting to know our followers. Book sales have increased, too.

We all have more of the most precious thing — time — rather than rushing from A to B. This has been a bonus that I wasn’t ever expecting to enjoy quite as much.

I’ve easily fitted in a daily Pilates, yoga or HIIT class at a time to suit me — there are so many free classes online. That’s not to say I won’t be glad when I can go back to the gym to see my friends again, but knowing there is an end in sight means I truly revel in and enjoy this moment. Only a year ago we had so many lovely events to look forward to: Henley Royal Regatta, Henley Festival and the Henley Grammar School reunion in July. Last year was a big birthday for me and several of my school friends, so we decided to hold a reunion which, of course, had to be postponed and re-scheduled for July.

Now we have to decide whether it is on or off this year. We will confirm at Easter. In the meantime, the wonderful thing is that more people have heard about it and signed up for our database of now nearly 300.

I appreciate that lockdown has not been easy for everyone and feel for those who have suffered. But, for me, it has been a bonus, a new experience and one that I’ve loved. To quote the words of Captain Sir Tom Moore: “Tomorrow will be a good day.”

Both of her books, So To Speak and Let It Go are available from www.steveshirley.com with all proceeds going to Autistica.

Crawley buses take vaccinations to hard-to-reach patients. Firefighters trained to give jabs in Basingstoke, famous TV gardener is filmed getting his.

Concern over tricky South African variant which has got loose in a few communities across UK, including Worcester, close to our family. Special taskforce hunting it down, testing for mutants.

NATIONAL hero, Captain Sir Tom Moore dies with covid, aged 100. Best of British, he appealed to so many, raising £33 million for the NHS. Hope it’s spent on something named after him. Seven-year-old grandson in London grapples with clause analysis in home learning session. Suggest I help but his mum says I’ll be visible to everyone in the class Zoom. I’ll explain it later.

Tony Archer’s kind sister buys him a Felpersham Flier for his model railway on his 70th birthday.

Queen and Prime Minister pay tribute to Captain Tom, the nation claps for him from doorsteps at 6pm. He was the embodiment of cheerful stoicism in dark times: “Tomorrow will be a good day”.

Olympics to go ahead but spectators must not cheer or sing.

FRIENDS and family gloomy today, weather doesn’t help. London children “crawling up the walls”. One of Worcester twins walks into door and has a black eye. Guernsey girls love the cut-out-and-stick book I sent, but could their mummy please have her own.

Scientists say virus peak is past, critical care cases falling, but new infections still too high. Plan to re-open schools on March 8, three weeks after most 70-plus vaccinations and the most vulnerable are safe.

New Yorkers have new lockdown exercise: “birding”, guided wildlife walks in national parks. Meanwhile, we have a baby boom, led by a street in Bristol — there will be others. Last lockdown people were buying puppies.

TREASURY looking forward to “vaccine fuelled recovery” later this year. We have not been spending enough over the last year and £1.25 billion is sitting in the nation’s bank accounts. We will be encouraged to go shopping after lockdown.

PM has plans to vaccinate over-50s by May — end or beginning? Government wants hotels to take in visitors to UK for 11 days’ quarantine. Difficult to manage, but there must be money in it, as they’re empty.

Schadenfreude — nation delights at parish council caught on Zoom in an indecorous battle. It could happen to any of us — watch out for illicit recording.

Astronomer wants to know if the skies are clearer across UK because of lockdown; can we count the stars in Orion?

Lunch for two. I’m an expert crumble maker but out of practice. Make my first pud in 10 months to use up frozen fruit. Spongey disaster. Need return of family Sunday lunches, had enough of this now.

KATHERINE BAXTER is a year 13 student at Shiplake College.

LOCKDOWN 3.0, what joy. Back to the endless Google Meets, constant assignments and monotonous routine. The uncertainty and pressure of exams and other downfalls aside, I think this is a time I will cherish as it has got me to focus on the small things. Cooking on Saturdays, long bike rides with my dad, weekly quizzes on Fridays. A chance to get back on terms with yourself.

Chocolate fondant making (still trying to get it perfect), vast walks with my mum, reading good books. A chance to connect with those you will regret not spending enough time with.

Films on Sundays, taking a step back in time listening to Eighties vinyls (dad’s collection, not mine), lengthy calls with those you wish you could be with.

BARRY TINDALL, 59, is a semi-retired businessman who has recently moved to Ewelme from Henley with his wife Tatiana. Between us, they have six children in Henley, Ewelme, London, the Lake District and Moscow.

AT the beginning of lockdown in 2020 we relocated to Ewelme, back to my childhood home. It was then that I rediscovered my childhood passion for bird watching.

It was spring and every day I spent a couple of hours walking in the fields and woods just to get some exercise. Birdsong was everywhere as the different species were establishing their nesting territories.

I became entranced by the singing and became immersed in their world, which came as a welcome relief. It took me away from the reality of the pandemic.

During my walks I had begun to notice some birds I remembered from childhood had disappeared. Lapwing, cuckoo, house martin and spotted flycatcher immediately spring to mind. Alongside these, species that used to be commonplace like bullfinch, grey partridge and song thrush seemed far fewer in number.

It inspired me to write a children’s book that I have now self-published. This was a whole new learning experience and at my age things just don’t sink in like they used to...

It’s called Tom Song-Thrush and the Big Hush and can be bought on Amazon or via me @ waterswhelmingbooks@gmail.com I would like as many children as possible to read it. It’s suitable for those aged from eight to 14.

This pandemic is not good in any way but it did prompt me to do something different, which isn’t always a bad thing. If someone had said to me a year ago that I was going to write and self-publish a book I would have not have believed them.

A strange and unpredictable year indeed…