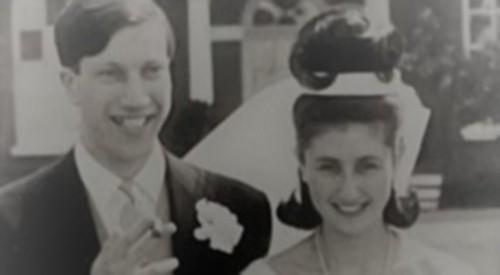 LAST week we had a wedding and a funeral. To be fair, the wedding was our anniversary of 18 years. We couldn’t go anywhere of course so on a whim I got out the wedding photos and took a trip down memory lane.

One thing led to another and several days later we were the proud owners of a slide show, which I then inflicted on anyone and everyone who had anything to do with us 18 years ago, plus anyone else who might or might not be interested.

I offered exclusive showing rights to all the customers we have for local veg etc and a few generously said “yes” and Sandra Brown sent back a photo of her own wedding from the same year approximately one week earlier.

I should not have been surprised that the two dresses, though different, were actually quite similar. A scooped neckline, fitted sleeves and bodice. So elegant. Sandra had more delicious details to share: “Like us, your parents must have endured the incredible 1962/63 winter, when the whole country was snowed up from Boxing Day until March, and wondered if spring was ever going to come.

“It is noticeable on our photos taken at the reception that in the grounds of the hotel the daffodils are just about out and the trees still bare — everything was so late.”

And now for the funeral.

Gerry, born just over a year after my parents on February 8, 1939, had a heart attack in October 2020 followed by a diabetic hypo just before Christmas. He was rushed into hospital on Christmas Eve and caught covid-19. He died on January 13 and his funeral was on Tuesday last week at Enfield Crematorium.

I didn’t know Gerry that well but he and I had exchanged various bits of information twice a year for more than 18 years. Quite important information as it turned out.

Of course, all visits face-to-face to care homes, sheltered housing and almshouses are off limits for friends so Gerry and I had communicated every few months by telephone and had made a pretty good fist of it.

We celebrated the Grand National virtually and VE Day and I had happened to call just before he was rushed into hospital when I spoke to his daughter, Julie, for the first time, who was stressed and scared.

Julie and I continued to exchange the odd text and she messaged me to say her dad had passed away. Without thinking much, I replied to say I would be happy to write a few words about him just for her — or to use at the funeral.

One thing led to another and I said my few words in front of 30 people I had never met before at Gerry’s funeral.

There was no wake. Nowhere to go except our cars and it was a quick run home. I was back in Kidmore End by 4.30pm. But what a day.

There is a time for everything

And a season for every activity under heaven

I found the song on YouTube sung by The Byrds called Turn! Turn! Turn! (To Everything There is a Season). It is one of my husband’s favourites. I sent the link to Julie at 10.30pm and we listened together, her in Tottenham and me in Kidmore End.

Our two worlds are so very different but for that moment we shared all that really matters. Bless Gerry.