Horse opera or hoofer... do you know the difference? 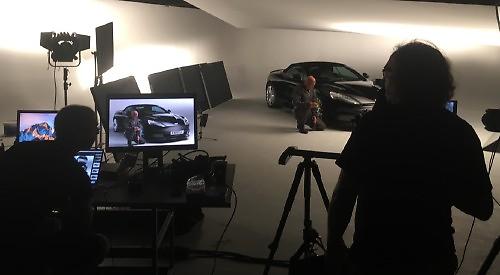 A PHOTOGRAPHER and video producer is sharing more than 30 years of knowledge and experience in a humourous new book.

The book promises to explain “the b******s that the film crew speak” in plain English and is illustrated by his friend Gray Jolliffe, a cartoonist from Hambleden, who worked in advertising for many years.

Richard began writing it after having to cancel all work during the first coronavirus lockdown from March to July last year.

The 56-year-old, who started as a photographer in 1985 and began shooting video about a decade later, took part in an online business marketing course on how to write about his area of expertise.

He began listing all the terms he knew, which he was going to compile into an electronic book and give away free of charge.

But after accepting further suggestions from friends and work colleagues, the list became so long that he decided to publish a physical version instead.

An initial run of 200 books has just been printed, with more to follow if those sell out.

The terms include “hoofer”, which is “not a horse but a dancer”, and a “horse opera”, which is slang for a Western film.

A “dead cat” is the large, fluffy muffler placed over a microphone to eliminate wind noise, which Mr Pinches says “can be stroked to calm nerves in moments of crisis”.

The “Martini shot” is the final shot of a piece, named after the product shot at the end of the TV adverts in the Seventies. Richard says: “Millennials won’t have a clue”.

He describes Christian Bale as “an angry method actor from my hometown, Henley”, who can often be heard abusing the director.

Meanwhile SDI, a cable which carries a digital video signal, is “nothing like an STD but some crew may be more familiar with that term”.

The centre spread illustrates the difference between six basic camera moves as many people wrongly assume that “panning”, or pivoting horizontally on a fixed point, refers to any movement.

The book, which was edited by Richard’s partner and video editor Liz Howard, is aimed at working professionals, particularly those just breaking into film-
making. However, he says anyone with an interest in the craft should find it interesting.

One of Gray’s illustrations shows a seasick cameraman who has just performed a “zolly”, a move in which the camera moves backwards while the lens zooms in to create a disorienting effect.

Another depicts an “adult” film shoot being disrupted by an over-enthusiastic stage hand.

Richard, whose clients have included BMW, Dell, Mini and advertising agency Saatchi and Saatchi, says: “I was literally doing nothing in the first lockdown and wanted to use my time productively, not just sit around doing puzzles. It started off as a serious project but I realised most books on the subject are incredibly dry and I could add some of my own humour to it.

“Many terms are unique to the film business and not known to outsiders. Some of them are hilarious and some are quite rude and crews probably find it highly amusing that they can get away with being cheeky to the uninitiated.

“It’s light-hearted but most of the terms are there. I missed a few minor ones but you could go on forever. It’s pretty comprehensive.

“Gray’s illustrations really add something special and he was able to suggest a few terms from his own time in the trade, which was helpful.

“Fine-tuning and proof-reading it was painstaking but it was satisfying to see the finished product.

“The feedback has been brilliant so far. People say they’re laughing while they learn, which was exactly what I hoped to achieve.”

• The Ultimate Guide to Film Tech Terms costs 6.99 and is available from www.richardpinches.co.uk