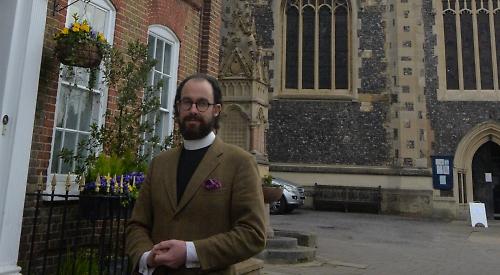 THE clock of St Mary’s church in Henley has stopped.

Jeremy Tayler, the rector, said he noticed on Sunday morning that the clock was significantly slow and he heard a scraping sound coming from the face while he was going up the tower.

He said: “We suspect that the hands are rubbing against the clock face, something that I understand has happened before, so we have stopped the clock.

“The company which services the clock has been informed and we await their visit. Hopefully we can get it sorted out soon.”

Robin Hartley, a churchwarden, said: “The clock has a habit of stopping periodically, and we think it’s because the hands rub the face of the clock. It is an old clock and, with temperatures rising, it sometimes grinds to a halt.

“We have been in touch with the clock reparers. We are assuming that this is the problem but we really are in their hands at the moment. We hope it will be repared within next month but we can’t put a date on it yet as we don’t know what parts might be needed.”

The clock and its quarterly chimes, which replaced a similar system dating back to the 1760s, were built in 1877 by engineer J W Benson, of London, and installed by then rector George
Phillimore.