Henley watch flies with US President 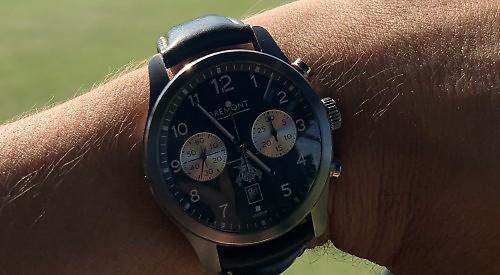 A WATCH made by Bremont of Henley, has shared a helicopter with the President of the United States.

The timepiece was worn by an American Marine pilot who was flying Joe Biden to Windsor Castle, where he had tea with the Queen following the conclusion of the G7 summit at Carbis Bay in Cornwall on June 13.

At the request of the manufacturer, which recently opened a new multi-million pound headquarters off Reading Road, he took a photo of the watch on his wrist with the presidential helicopter Marine One standing on the castle lawn in the background.

The mechanical watch, which is finished in silver and black, is themed around the Sea King Mk V helicopter, the British equivalent of the various craft flown by the Marines.

Four days earlier, before the summit began, the unnamed serviceman and a colleague visited Bremont’s offices for a first glimpse of a new design, which will be themed around the US Marine Corps’ Helicopter Squadron One. The unit, also known as HMX-1, is responsible for transporting the President and other high-ranking officials.

The men took a tour of the facility, which is known as “The Wing” because of its shape, and were shown how metal parts are milled on site then assembled in dust-proof laboratories by technicians.

They presented the company with a “challenge coin”, a form of commemorative token, bearing an image of two American helicopters and the message “Welcome aboard Marine One”.

Bremont, which was previously based at Sawmills, off Marlow Road, has undertaken scores of “special projects” for military forces around the world and has a separate division dedicated to the task.

Catherine Villeneuve, the division’s head of sales, said: “The Marine pilots are big Bremont enthusiasts so they were delighted to visit when they had a couple of days free.

“We’re well known among the US Air Force and Navy and it was a honour to show them around. They were very excited to see how the design is coming along.”