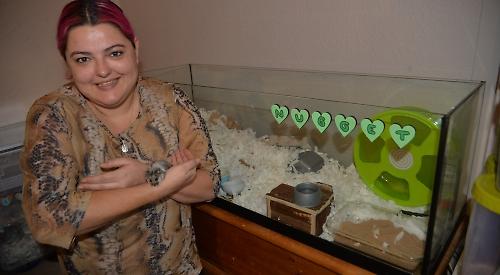 A WOMAN got more than she bargained for when she offered to rehome a hamster.

Kellie Hinton only discovered that her new charge Pepper was pregnant hours after she had brought her home and she gave birth to seven pups.

As a result, the town councillor found herself with a total of 12 hamsters so she has been busy finding homes for some of the newborns.

Kellie has become something of a expert since she bought three Russian dwarf hamsters last year — one each for her daughters Hallie and Eden and another for herself.

The 11-year-old girls’ pets are called Cookie and Bean, while their mother named hers Stevie Ray after blind singers Stevie Wonder and Ray Charles as he has red eyes.

Each rodent had its own cage at the family’s home in Upton Close and mother and daughters enjoyed the experience so much that they decided to adopt two more, Fudge and Rex, from people who were no longer able to care for them. Kellie, 36, then set up H-o-T Hamster Rescue and started following hamster owner groups on Facebook, where she swapped advice on how to care for the animals.

It was through this that she agreed to adopt Hammy, an older hamster, and then adopt Pepper who belonged to a woman from Slough, who had two.

Kellie who has been nicknamed the “Crazy hamster lady”, said: “She was 10 weeks old at the time and not being kept in good conditions, which I was really upset about.

“I asked about the other one, too, but was told that I wasn’t allowed it. I was in tears afterwards.

“We took Pepper home and I remember thinking she was very pear-shaped. That night, she gave birth.

“As she had a stressful pregnancy, we didn’t think any of the pups would survive but I followed a crash course in pregnancies and let nature take its course.

“You are not supposed to touch or disturb them for two weeks, so we could only leave water and food and she would come out and get it. On day 14 I cleaned the cage and looked in on mum and she had seven very healthy little Syrian babies — there were no losses whatsoever. She was an amazing mum.

“We already hae five so clearly we couldn’t keep seven more and are looking for suitable homes, locally if possible.”

The family are keeping two of the pups, Nugget and Kori Jnr, while Emily, Pip, Craig and Ru have been rehomed. That leaves only Nala and Hammy to find a new home.

When Kellie gives a hamster to a new owner she provides details of the animal’s breed, place and date of birth and reason for being rehomed.

“We will always have space for rescues,” said Kellie. “The hardest part is not making them family members as that is how I think of them even when they are not going to be here permanently.

“What I want to do is provide a service, whether that is a space for people who want to go away or caring for those which have been mistreated. We don’t ask for donations but the money we get we invest back into the care of the hamsters.

“I contacted South Oxfordshire District Council to see if there was anything I needed to do or have in relation to keeping animals but, sadly, it’s under-regulated.

“As I am not breeding or selling animals for profit, there really isn’t anything I needed to do other than have all of the equipment needed and to spread the word.”

She said she had a good relationship with the Henley Pet Shop in Bell Street and encouraged people to shop there rather than online or driving to Reading.

Kellie, a former town mayor, said keeping hamsters had proved to be a source of great joy for her, partner Ben and their daughters.

“They give me joy and emotional support,” she said. “When I am in a bad mood, or feel a little low, or have lots of housework to do, they cheer me up. Hamsters have taken over my life in the best way.”