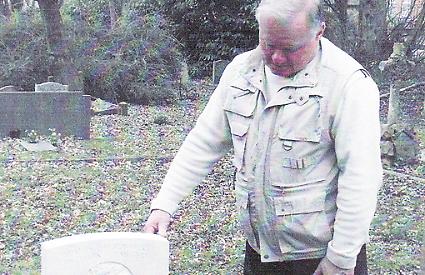 A SOLDIER who fought in the First World War finally has a gravestone — thanks to a distant relative.

Private Philip Langman was 23 when he was buried in the cemetery at St Peter’s Church in Knowl Hill, a few months after being sent home from the western front due to illness.

Pte Langman, who came from Littlewick Green, had been serving with the Royal Berkshire Regiment.

His resting place has now been marked following research by Mike Willoughby, an amateur historian who also comes from Knowl Hill and is related by marriage.

Mr Willoughby, who now lives in Woodcote, said: “About 10 years ago, while researching the men of Knowl Hill who had died in the First World War, I discovered Pte Langman’s name on the village war memorial and the Warner’s Brick Kiln memorial in the village.