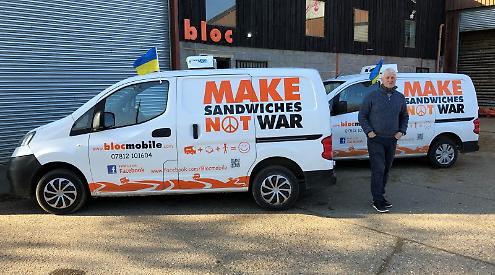 A SLOGAN written on the side of a sandwich delivery van has taken on a new meaning with the war in Ukraine.

Bloc, which is based at Manor Farm in Peppard, has nine vans and each one bears the phrase “Make sandwiches, not war”.

When one of the drivers visited Wallingford recently he was asked by a man if he would drive around the block again in order to be filmed.

The man was originally from Ukraine and wanted to show his family still living there the support for the country in Britain.

David Gervaise-Jones, 70, who owns the business, said: “The message on the side of our vans has always been the same but we wanted to do something when we heard a Ukrainian MP on the radio sending out a plea for people all around the world to show their support.

“We decided to fly Ukrainian flags on each of the vans and on the first morning one of our drivers was on his usual route to the Hithercroft industrial estate in Wallingford when a man came running out and asked him if he would mind driving back around and approach again.

“We play the Great Escape jingle on our loudspeaker so that people know we are coming and the man asked if we could play it again while he made a video.

“He told us that he was from Ukraine and he was going to send the video back to his family at home in Kyiv. It made us all feel very emotional.”

David said the slogan came about when the company created a website some time ago.

He said: “We had a guy in to build it and he suggested that we have a thought for the day on it. We came up with the phrase ‘Make sandwiches, not war’ and he liked it so much he said we should put it on the side of our vans because it would make people smile, so we did and it does. We always thought it was a nice phrase but now it has taken on a new meaning. It’s good to be able to say that we support Ukraine and for people to tell their families in Ukraine that we are not on Putin’s side.

“That makes me feel good because we have all seen the news of what’s going on there.

“One bit that really got me was a guy outside Mariupol, who looked to be the same age as me, pushing a wheelbarrow with bits in and I just started to cry. I think we all well up when we see things like that.”

David and his son Oliver previously ran a coffee shop, Bloc Brazilian 2 in Henley market place for 11 years. It closed it in 2013 due to growing competition.

By then, the pair also had two vans delivering sandwiches and set themselves up at the former Highlands Farm industrial estate.

David said: “When we had the coffee shop in Henley we had customers from Ella’s Kitchen in Rotherfield Greys who would come in and collect their sandwiches. They asked if we would be interested in delivering some to them.

“At first I thought I didn’t particularly want to drive up there at a busy lunchtime and deliver one tuna sandwich but they said there were quite a few others there.

“Then the rest of the estate started buying them and I decided to get our first refrigerated van.

“That coincided with the explosion of coffee shops in Henley. When we started there was only us and Bell Street Baguettes and another in Friday Street but then there was Starbucks and Patisserie Valerie in Market Place and then Caffè Nero and Costa.

“The only way we could keep our business running was through the vans so we decided to close the shop. The vans are much cheaper to run and we have been able to build up the business.”

David, who lives near Newbury, added: “I used to be a lawyer and that was a stressful job but doing this, the worst thing that could happen is the bread doesn’t arrive.

“All our drivers are between the ages of 58 and 75 and they never let you down. When the first lockdown happened we were all on furlough for a couple of months, then we brought back three vans and we have steadily built up the business again and we are now just about at pre-covid levels.”