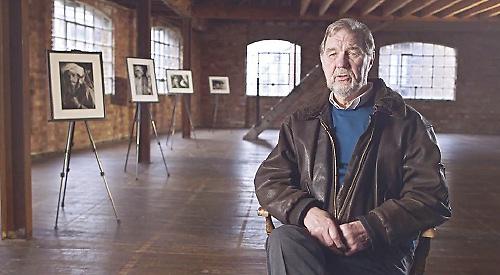 AS an award-winning Fleet Street photographer, John Downing is used to being behind the camera.

He travelled the world, covering wars, famine and other major stories for newspapers and was made an MBE in 1992 for services to journalism.

But it is as the subject of a documentary and in front of the lens that John is now celebrating his latest accolade — or rather his son Bryn is.

Behind the Lens — John Downing MBE is a 35-minute film about his photographs and the stories behind them which was made production company INP Media, which Bryn runs.

On Saturday night, it was named best documentary at the Crystal Palace International Film Festival and father and son were there to enjoy the limelight together.

The film was made at a freezing warehouse in London, where 75-year-old John had to talk into the camera about his years on the road and particularly about his 15-plus years as chief photographer of the Daily Express.

John, of Reading Road, Henley, says: “It was an uncomfortable feeling being the other side of the lens and I was strangely nervous talking about my work. When you’re having a pint with a pal telling stories it’s easy but with a lens pushed in your face it’s a different game altogether.”

During his career he captured images of wars around the globe, including Vietnam, Bosnia, Beiruit, Rwanda and Iraq. He experienced living rough for weeks at a time with guerrilla fighters in Sudan, Nicaragua and three times in Afghanistan.

In Uganda he was imprisoned by soldiers working for the dictator Idi Amin.

John recalls: “One general took his pistol out of his belt and pushed it against my face. He said all Europeans were spies and I was determined to show I was not scared, although I was.

“I told them I was just a journalist and the general put his gun away. I managed to keep my camera and take pictures in the prison.” The images were plastered across the front page of the Daily Express with the headline: “World exclusive pictures taken inside the black hole of Kampala”.

John was inside the Grand Hotel in Brighton when it was bombed by the IRA during the Conservative Party conference in 1984 and took exclusive pictures of prime minister Margaret Thatcher leaving the scene in a car.

He was almost as uncomfortable recalling these stories and others during filming for the documentary as the warehouse was so cold he had to wear a jacket for warmth.

“It was freezing,” he says. “I have had to deal with heat in the past but I’m not so good with the cold!”

John, who is married to classical pianist Anita D’Attellis, did not find out about the awards ceremony until Bryn, who produced and directed the film, told him about them days before.

“He said they were in the final four so I should come along for dinner and a laugh,” he says.

“It really is something special to be recognised with your son. He has never had any interest in my photographs and I have never been in a position to help him.

“I made my mark and he made his, but having success together was very special.”

I’m happy to report that John still keeps his hand in with the camera and his work can occasionally seen in this newspaper.