All poor Chase wants for Christmas is new home 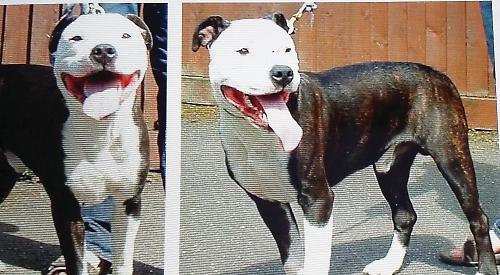 IF, like me, you are a dog lover, then spare a thought this Christmas for Chase.

The two-year-old bulldog-Staffordshire bull terrier cross is back at a rescue centre after being rehomed not once but twice without success.

Now a dog trainer from Wargrave is hoping it will be third time lucky for the dog that she has become very attached to and is desperate to find him a loving home.

Kim Potter, of Loddon Drive, first came across Chase at Binfield Dog Rescue Centre in Wokingham, wherehe had been since July last year.

She says: “He’s a very interesting and bright dog.

“When he came in I had just taken on another rescue dog, who I still have, so I couldn’t take Chase as well.

“It was another bit of bad luck for him as he just missed out on a really good home but he was just my sort of dog, so I started to walk him twice weekly and paid for him to be neutered.

“He’s a lovely dog and a real character who just needs a calm and confident person.”

Kim thought Chase had found the perfect home when he was adopted by a family in Bracknell.

She visited them at home to check the house and garden were suitable before giving permission. Then, out of the blue, the family told her they no longer had time to look after Chase properly.

They had signed formal adoption forms, so they were legally obligated to return Chase to the rescue centre if they didn’t want him, but instead they rehomed him by advertising on
Facebook.

“They said they had found a loving, young family for him,” says Kim. “I was very concerned for Chase but also for the new family because he would be too boisterous for small children.”

Luckily, a friend saw the advert on Facebook and from there tracked Chase down to the new family in Woking.

Kim says: “The parents were relieved when I offered to come and get him.

“They had realised after a couple of days that they couldn’t give Chase the time he needed but could see that he was a very affectionate dog and good with the children and weren’t sure what to do.”

Chase is now back at the rescue centre and being walked once again by Kim as she hopes the right owner will come along.

She says: “Chase had been on an adventure! He slept in proper, warm homes, not a concrete kennel and run, with proper families who walked and cuddled him. I want that for him again but with his special person this time.” Kim says he needs an owner who will be able to handle him and give him regular exercise and she has offered her professional help and support free of charge.

“We’ve got to get the right owner for this dog,” she says.

“He’s a handful and he has not been settled in a home for so long that it’s like starting from the beginning again.”

“He’s strong and very affectionate, with no aggression, but very boisterous. He has calmed down a lot in the year I’ve been walking him and he will continue to calm down with the right person.

“With just two visits every week, I have taught him to walk better on a lead and to retrieve a ball and he loves charging through the agility tunnel toy!

“He isn’t a difficult dog, just young and full of energy, who doesn’t get enough mental or physical stimulation.

“All he gets is me walking him twice a week when needs it twice a day. He needs someone who wants to be out walking a dog.

“I love this dog and I am trying very hard to find him a calm, settled, mature owner with the time to invest in him and a big garden secure enough for him to play in. He is a super dog with huge potential.”