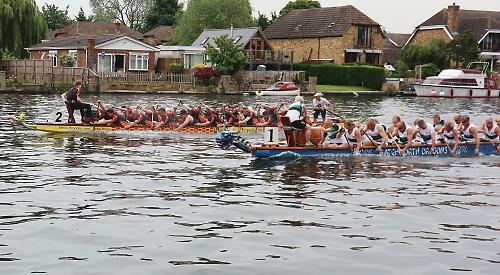 Having missed the previous round in Bristol, Henley Dragons arrived in bottom place of the Premier League.

The morning session comprised 200m races with crews competing in two heats, their aggregate times deciding which crews raced each other in the final round.

Henley was drawn against Worcester in the first heat and, after a quick start, enjoyed a winning margin of four seconds.

In the second heat Henley raced Cambridgeshire Royals and again started well and held on for a two-second victory.

Henley’s aggregate times placed them in the minor final, racing for third place overall against hosts and local rivals Wraysbury.

After 21 strokes Henley was three seats up but Wraysbury battled hard all the way to the finish line. Henley did well to hold on for victory, by under a tenth of a second.

The second part of the day comprised a 5,000m pursuit with the slowest crew in the 200m race starting 20 seconds before the next slowest crew and so on down to Wraysbury, Henley, Amathus and Typhoon.

This time Amathus pipped Typhoon by just one tenth of a second while Wraysbury turned the tables on Henley who finished fourth fastest.

Combing the results of both races, Typhoon and Amathus shared top spot with Henley and Wraysbury sharing third place.

The points gained from this event move Henley four places up the league table and expect further progress in the upcoming races.