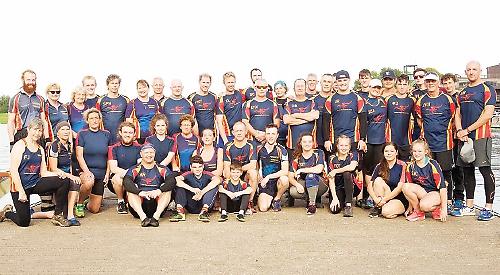 A RECORD 54 Henley Dragons paddlers competed in five race categories at the National Watersports Centre in Nottingham where 23 teams from around the country battled it out in the final races of BDA national championships season.

Saturday was the busiest and most logistically challenging race day, meaning some paddlers were finishing one race and immediately jumping into another. Although Sunday saw fewer races, there were concerns over stamina and injury amongst the team from the previous day’s exertion.

Despite this, Henley Dragons came away from the weekend with an impressive, club record haul of medals. The open crew secured third place in the 200m, 500m and 2,000m, the senior crew won silver in the 500m and the junior team — ‘The Henley Teen Titans’ who joined forces with paddlers from Bristol, Pershore and Preston clubs — swept to team gold in all three of their races beating the rest of the field by more than 15 seconds. This secured Henley Dragons with an overall silver medal for the weekend.

• Henley Dragons are based at the Eyot Centre and can be seen training on the river in the heart of Henley on Thursday evenings and Sunday mornings. Anyone interested in joining the club should visit www.henleydragons.online/ for further details.